The brute strength of Les Bleus 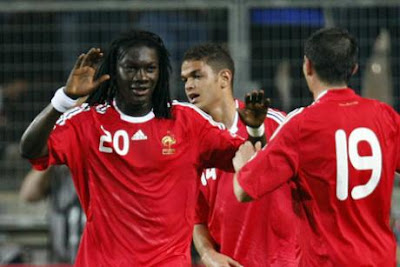 In an earlier posting, I paid tribute to Karim Benzema, one of very few French players to score a goal on his international debut.

Three who did went on to become legends, namely Just Fontaine, Michel Platini and Zinedine Zidane.

Bafetimbi Gomis may be destined for greatness as well. Like Zidane who scored two goals - a stunning strike in the 85th and a header two minutes later - after coming in as a substitute against Republic Czech in August 1994, Gomis got his name on the scoresheet twice against Ecuador three days ago.

Raymond Domenech has the luxury of picking a few combinations - Benzema-Anelka, Benzema-Henry, Benzema-Gomis, Anelka-Henry, Anelka-Gomis and Henry-Gomis, or try to accomodate Henry on the left with Anelka and Benzema in the middle, surely a scary thought for opposing defence.

They combine speed, brute force and technique with finishing prowess. The Dutch, the Italians and the Romanians will have their hands full no doubt! Allez Les Bleus!

Picture shows Gomis celebrating his goal. No place for the left-footed trickery of Hatem Ben Arfa (background) though.
Posted by rizal hashim at 2:14 PM

Bro rizal...after all those drama kings had shown us on hockey and badminton...
lets just sit back an enjoy the Euro football which kicks off on 7th...
After all the chaos on CYC, the less anticipated Piala Benua, and getting less attention SUKMA games lets us all keep our eyes glued to the television...
After all it once every four years so lets hope sum minows can spring suprises just like Greece did in 2004....

hi, why dont you investigate something hot happening at msl, and your good friend satwant will be happy if you write those stories i think, do it to show you always reports fairly my dear friend rizal, he is KJ lobbyist for FAM