The Sultan of Selangor's Cup - downgraded

My sympathies to the Selangor team. A day after they were shown the exit by Kelantan in the Malaysia Cup, they had to return to Shah Alam and play the Sultan of Selangor Cup, an event that has been downgraded due to  poor timing. Not suprisingly, Selangor were outplayed by their Singaporean counterparts, being on the receiving end of a 6-0 whitewash.

If you were a footballer who had just suffered a defeat in the country's premier tournament away from home, I don't think you would be in the right frame of mind to play another match, an insignificant one at that, 24 hours later.

Now, who would be so smart to schedule the Sultan of Selangor Cup right smack in the middle of the Malaysia Cup? Must ask Karim Munisar! 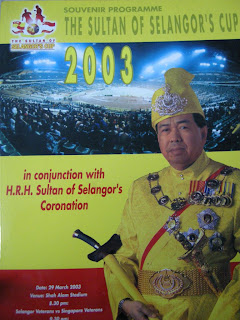 March 2003...I don't think the match was held anywhere near a Malaysia Cup date... 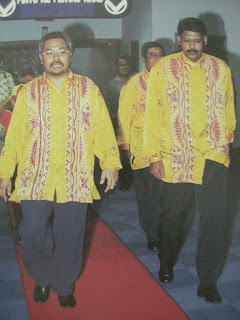 I wonder what ever happened to former organising secretary S. Siva (right), who helmed the event from 2001 to 2007?
Posted by rizal hashim at 11:31 PM

Should get Andrew Gopal of UKRC to organise lah Rizal. Saw his tournament last weekend sponsored by astro. Fantastic organisation.
That guy really has passion for sports.

its indeed sad to see the sultan selangor's cup in this status.
for god sake someone must tell karim munisar this is not his 'tournament'.
It is the SULTAN OF SELANGOR for ur infor karim.
The organiser led by the powerful, crazy publicity and 'kaki bodek' karim, should take advise from those who knows soccer better..and put aside any "agenda persendirian'.
One should take a look at the souvenior programme...one wonders whether its a sultan selangor cup souvenior programme or karim's "facebook"

maybe its time to bring back s. siva as the secretary....
during siva's time.... condition was set for the main purpose of the veteran game... take example of selangor veteran - why must shahrin majid included into the veteran squad when he is still 'young' to be considered as a veteran....
take a look at the singapore veteran team... thats a true veteran team..
even for the main game between the selangor selection and singapore selection.. condition was set for the singapore team - only three foreign players allowed to be played on the field...
and the most important factor is that, the sultan selangor cup was never played during the malaysia cup stage.
Is karim bigger than the tournament or we want to see the sultan selangor's cup status goes down any lower than what had happened this year... ?

Yeah,what happened to Siva-one of the pioneers, was really well organized. Maybe someone should look at bringing him back for 2011?

Interesting take...hope u can get the other side of the story ! :)