A modicum of decency, please!

The twist and turns of events leading to the Olympic Council of Malaysia's biennial general meeting tomorrow is unprecedented. While the cloak-and-dagger stuff is what newshounds thrive upon, it is saddening to note officials from the umbrella body - supposedly the paragons of sportsmanship and virtue - have sunk to such depths in the jostle for positions, which come with privileges, perks and access to the who's who in the world of sports.

Mazlan did not hide his support for Kok Chi, whom he described as virtually indispensable owing to his vast knowledge of sports, crucial to organising a successful 2017 SEA Games to be hosted by Kuala Lumpur.

As far as I was concerned, Beng Choo was always the natural choice to take over from Kok Chi, despite having once withdrawn from challenging the latter for the secretary's post in the 2009 elections. Read Beng Choo v Kok Chi

Question is, will Beng Choo win uncontested or Datuk Danyal Balagopal Abdullah, nominated for the post but somehow intriguingly and suspiciously suspended by Olympic Council of Asia (OCA) two days ago, be allowed to stand?

Danyal was accused of passing racist remarks in a group discussion over the whatsapp application during the IOC General Assembly, successfully hosted by OCM, to which he was quick to deny.

"This is a fabrication. IOC reps were misinformed on the privacy and controlled daily working chit chat net. Tunku Imran understood and supported my reasons for the  very harmless remark between me, the Cdr and security volunteers. IOC and Tunku Imran acknowledged that remark had been taken out of context by some vindictive parties," said Danyal.

Danyal's position came into question after he was suspended by the OCA from engaging in any activities related to OCA. To me this is a last-ditch attempt to discredit Danyal.

To illustrate OCM's sincerity in espousing the democratic and fair play principles, Danyal should be allowed to contest. Let the delegates choose. Otherwise things could really turn ugly and the Sports Commissioner may have a headache dealing with the aftermath!

Whoever wins face a huge challenge. For decades the umbrella body suffers from the perception that it only springs to life when an international multi-sports event is just around the corner - be they the SEA Games, the Asian Games, the Commonwealth Games or the Olympic Games.

Since Tunku Imran Tuanku Ja'afar defeated incumbent the late Tan Sri Hamzah Abu Samah in the elections in 1998, OCM appears to have taken a friendly approach and supportive of elitist sports such as squash, cricket and golf.

While Hamzah was seen as being able to protect OCM affiliates from getting trampled upon by the authorities, Tunku Imran does not prefer the confrontational approach. 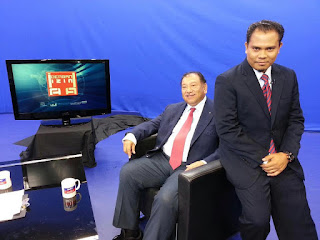 Tunku Imran has always been generous to loose cannon in sharing some of his precious time, so much so that I have interviewed the squash founding secretary on TV and on print - for Berita Harian and The Malay Mail - and the weekly pullout EPLx Kosmo. Tunku Imran took me by surprise by giving me a special mention - saying Astro Arena added colour to the world of sports through various programs with the presence of a number of presenters as well as pundits, by identifying me by the colour of my shirt (the only one in the ballroom to be wearing the orange tiger stripes -  when OCM  renewed its strategic partnership with Astro in May

Tunku Imran lending his ears to Shaukei and the chap on the right (recognise him?) Tunku Imran's critics claim he has not done enough to support the NSAs 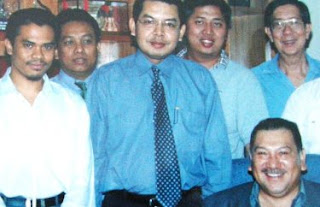 This picture was taken in 2000, two years after Tunku Imran defeated Hamzah for the OCM presidency. As general secretary of SAM, I arranged for a courtesy visit of the office-bearers to the doyen of OCM, Kok Chi and of course Tunku Imran. He will be challenged by Tan Sri Anwar Mohd Nor, who as the Navy chief broke tradition by being appointed as Chief of Defence Forces - a position traditionally filled by the Army chief - in 2005. The Malaysian Golf Association (MGA) president represented the country in hockey in the Tehran Asian Games in 1974 before eventually becoming the Malaysian Hockey Federation (now MHC) president. 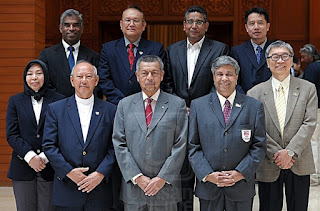 Anwar and his Team B running mates, picture Utusan Online 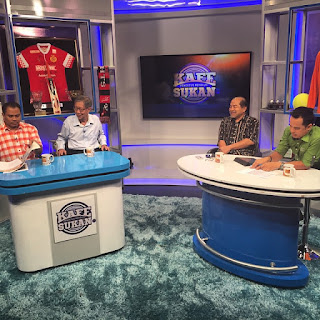 Kok Chi and Mazlan on Kafe Sukan. It was fun reporting tiffs between NSC and OCM those days 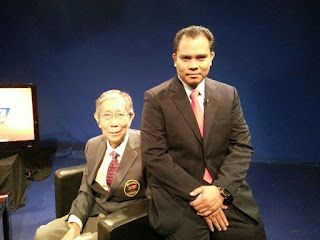 Kok Chi knows when to attack and when to defend, probably a disciple of Sun Tzu's art of war, here with me on Dengan Izin. But his battles with Danyal have turned really personal... 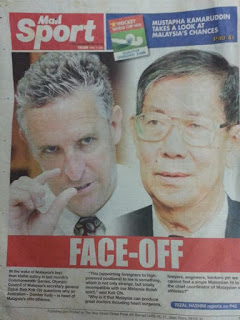 My story hit the back page of the Malay Mail, pitting Kok Chi against Damien Kelly. The story, written in April 2006, naturally landed Kok Chi in hot soup with Azalina, the then Sports Minister 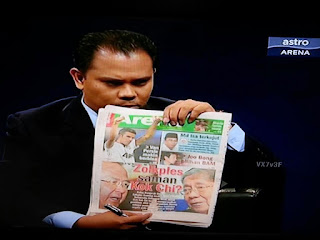 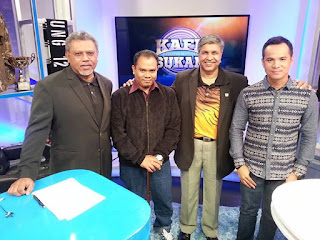 A former rugby player, Danyal came into the athletics scene at the height of the MAAU's controversial suspension, in he came and the former Navy Inspector General quickly brought the IAAF High Performance Training Centre (HPTC) to Bukit Jalil. In his statement made at the Royale Chulan, Danyal said: "I don’t wish to take this any further than necessary as there is a directive by the OCM President. Suffice to say that I am not suspended by OCM and I will still be contesting for the post of Secretary General at the OCM AGM tomorrow. I did not expect people in sports to stoop this low and possess such malicious intent. I will seek legal advice on this matter and respond accordingly to all parties." 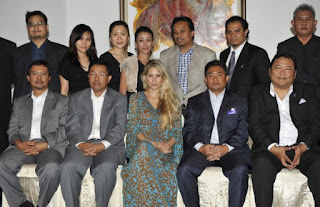 Taufik (seated, second from right and on Anna Kournikova's left) is contesting as an independent. President of the Judo Association and also the president of Selangor Tennis Association,, he is eyeing one of the four vice-president's slots. 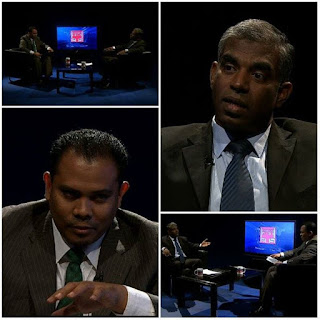 The assistant secretary's post will see a tussle between Kok Chi and T. Kumar, who was the brains behind MTA's offensive assault on the Sports Commissioner's Office after the national body was de-registered in 2005. Kok Chi was the one who brought Kumar into OCM as assistant secretary in 2011. Kumar then turned adversary before he took up the cudgels to challenge Kok Chi in 2013. He lost, naturally.

In previous years I have written The Fat Cats,  My pick for OCM Cabinet and drama in OCM.

Now if you ask me who my line-up would be, let me summarise:

Battle between two ex-national athletes but Tunku Imran is likely to prevail. Could well be his final term.

Norza is the flavour of the month despite spreading himself thin as chairman of ISN, treasurer of FAM, deputy president of BAM and president of KLBA. With Mohd Noor having walked out during the MTBC general meeting, it does not bode well for the former City Hall director-general.

An independent candidate that could sneak in as a vice-president.

Malaysian Weightlifting Association president who is tipped to take one of the Veep seats.

Hard to unseat Datuk Mumtaz Jaffar but who knows...

If Danyal gets to contest, it will be a battle royale but Beng Choo is likely to create history as the first women Secretary General of OCM.

Moira is a staunch supporter of Kok Chi and does things like conducting various courses and programs organised by OCM in an understated manner,

Rosmanizam, assistant editor at Utusan Malaysia, is the driving force behind Malaysian Malays Cricket Association and goes by two other names - K.T. Rajah and Ang Teck Lee. A true Malaysian. 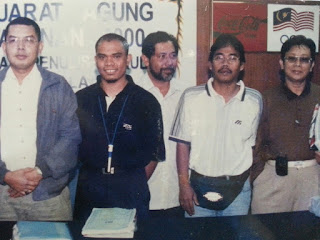 When I was elected as general secretary of SAM in 2000, Rosmanizam (third from right) became the treasurer. He mentored me on the ways of running an association by virtue of his experience in cycling and cricket. Forthright and frugal. OCM assistant treasurer from 2007 to 2013.

Tough one, as incumbent and Kedah Cricket Association president Feisal is a respected figure in the cricket world. A UK graduate, he brought Kedah to the Premier League title four years on a trot and was appointed team manager, and last year was handed the Volunteer of the Year award by the International Cricket Council (International World Level Award), only the second Malaysian to be given the honour after Tunku Imran. Jee Seng, senior general manager, group corporate strategy at AmBank, is vice-president of Table Tennis Association of Malaysia and team manager of the ping pong team to the SEA Games earlier this year.

Frankly speaking, Malaysia cannot afford to have an OCM that behaves like the Obstinate Cabal of Mavericks, Mutineers or Mercenaries. By right the office-bearers should represent the acronym Outstanding Chieftains of Malaysia.

The delegates, expected to number up to 90, must realise the 2017 SEA Games is around the corner. This requires the presence of individuals who are tried and tested in all organisational aspects, including technical know-how. Then again no one in OCM should be given the impression that he or she is indispensable and that no one is bigger than the institution.

Anyhow, with politicians preferring to shoot from the hips with little regard to intellect, let it be the sports leaders who show the rest of Malaysia a modicum of decency, nothing less. 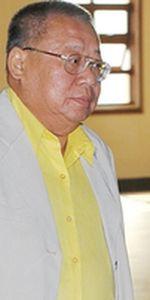 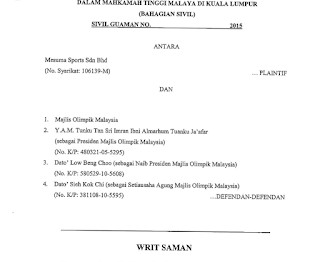