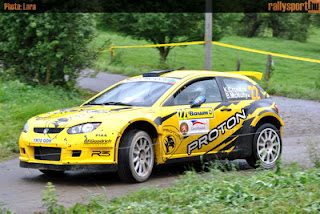 The PROTON Satria Neo S2000’s second place finish last year and the pairing of Scotsman Alister Mcrae with newly-recruited reigning British Rally champion Keith Cronin in a two-car assault places PROTON among the top contenders to look out for at this weekend’s Rally of Scotland.

The three-day rally beginning Friday (15 October), also the 11th and penultimate round of the Intercontinental Rally Challenge (IRC), covers a total of 196.92km of competitive special stages. The Rally gets under way with two dramatic evening stages on Friday through the grounds of Scone Palace before teams face the high-speed and fast-flowing special stages in the forests of Perthshire and Stirlingshire. The ceremonial finish will be at Stirling Castle on Sunday.

With last year’s Rally of Scotland regarded by many as being among the wettest rallies on the IRC, weather conditions is again anticipated to influence the outcome of the event. This time round however, the forecast for the weekend seems to be brighter skies, which essentially means more grip for the drivers.

“The car has definitely improved throughout the year, with the work on the engine and damper settings paying dividends… I’m certainly looking forward to competing at home and this rally has good memories for me as it was my first IRC round for PROTON and it also became PROTON’s best result in the IRC so far,” said McRae, who alongside co-driver co-driver Bill Hayes, finished second overall in the rally in 2009 to record PROTON’s best ever finish in the IRC to date.

“I know most of the stages well from my earlier career which could be an advantage, particularly if we get a bit of good old fashioned drizzle which is always a possibility at this time of
year!”

Much of the previous week has been spent in Wales testing and further developing the Satria Neo S2000 in preparation for rally. It was also an opportunity for Cronin, who will only be making his second appearance with PROTON, to get better acquainted with the car. In his debut at the Barum Czech Rally earlier this year, the 24-year-old had been on course for a top five performance before retiring on the penultimate stage.

“I’m more familiar with the car and with what’s going on inside the cockpit. At the end of the event, I’d like to think we’re going to be aiming for a top-five result, but there’s a lot of strong competition out there,” said Cronin who only last week, captured his second consecutive British Rally Championship title.

The rally will also see a third Satria Neo S2000 privately-entered by 19-year-old Welsh driver Tom Cave who finished eighth overall in 2009. Driving under Davies Motorsport Services but with service assistance from the PROTON Team, Cave in 2007 was the United Kingdom’s first and only minor international rally drivers.

With a host of developments and upgrades designed to breathe more horsepower into the Satria Neo S2000 and enhance its ability to withstand the punishing Scotish forest stages, PROTON is confident of bringing to the rally a strong package although downplaying its chances of securing the manufacturer’s first victory in the IRC.

“Returning to Scotland raises the expectations many have on PROTON. It would certainly be great to repeat or better last year’s performance but we’ll just have to wait and see how the rally progresses. We’ve definitely made a lot of improvements to the car throughout the year but our selected participation in the IRC this season is also more geared towards trying a lot of new things as well as driver combinations in preparation for a stronger assault in 2011,” said PROTON Group Managing Director Dato’ Syed Zainal Abidin Syed Mohamed Tahir.

“Having said this, and between McRae’s podium finish in 2009 and where we are today in terms of rallying and international awareness as a car manufacturer, PROTON has been able to establish a strong following in Scotland and we’re looking forward to giving our Scottish fans a good show this weekend.”

PROTON’s participation in the IRC is part of its marketing and branding strategy to propel the brand globally via motorsports. The IRC provides PROTON with an excellent and cost effective platform to enhance brand awareness in line with the aspirations of becoming a global car manufacturer. The championship attract enormous international media interest and commands a large television audience worldwide with the events broadcasted in 59 countries across Europe, Asia, Africa and America, reaching 240 million television viewers.

Thanks you for info n giving me ideas...