BEFORE the world became consumed with Tik Tok and Instagram, Gen X like me and the rest of my fellow earthlings relied on mainstream media for our daily diet of news. Then came blogging.
Inspired by Rocky Bru’s socio-political blog which drew a large following beginning in 2006, yours truly jumped on the bandwagon in 2008. So did Satwant Singh Dhaliwal, a former colleague at the Malay Mail sports desk from 2001 to 2004.
Love him or hate him, Satwant’s now defunct blog enjoyed a wide following not only because of his controversial take on issues, or broadsides bordering on personal attacks against certain individuals but above all his exclusive interviews with big names such as Datuk Lee Chong Wei which were then picked up by the mainstream media.
When Haresh Deol called me to break the sad news that Satwant had passed away on Friday the 14th of October, 17 days shy of his 60th birthday, I felt a profound sadness. For we were so close at one time that the late Datuk Sieh Kok Chi, the doyen of the Oympic Council of Malaysia (OCM), labelled us R&D, Rizal and Dhaliwal for our often opinionated, controversial and news-breaking approach.
Satwant remained an influential figure in Malaysian sports until the day he died.
For all his flaws and our differences, Satwant was a generous soul. Before joining the desk officially in 2001 ahead of the SEA Games in Kuala Lumpur, he would often dropped by at the office to offer food from his work place, the Royal Selangor Club. “Woi bodek ka” I used to utter to him.
Satwant was indeed a welcomed addition to the sports desk already reputed to be the best in the country. His knowledge on sports other than hockey on top of his experience in sports administration gave the desk a new dimension.
The desk was indeed the best in the country, without a shadow of a doubt, continuing a proud tradition of producing the best stories since the 1970s.
With Johnson Fernandez as the sports editor who was passionate about football and hockey as illustrated in his weekly column Game All in Sunday Mail, the desk churned out stories from a different angle.
After decades of serving the community as an afternoon paper, the Paper That Cares went regional in 2003. So we went head to head with the morning papers. But instead of the direct reporting style practised by the morning papers, The Malay Mail sports pages continued to be filled with human interest stories -  they tug at the heart and fog the mind!
The most senior writer then was Tony Mariadass, a qualified football coach who was also an expert in tenpin bowling. He succeeded Rajan Etickan as the sports editor at the tailend of Satwant's Malay Mail career.

From left Tony Mariadass, Mustapha Kamaruddin, Satwant, yours truly and Fariq
Mustapha Kamaruddin or Moose to everyone, was the main hockey and rugby writer, counting Volker Knapp and the late Tan Sri Zaman Khan among the victims of his criticism. His nom de plume, when he wears the Argentine hat, was El Loco.
Fariq Rahman was someone we fondly called Royal Reporter, for somehow he managed to enter the inner circle of the royalties, Pahang and Selangor especially, which gave him access to a lot of inside stories of the Malaysian national and Selangor football teams, apart from his contacts in squash, tennis and combat sports.
Yours truly was focused on the Olympic Council of Malaysia (OCM), National Sports Council (NSC), Youth and Sports Ministry (KBS), FA of Malaysia (FAM), mainly on youth development, badminton, track and field, and less fancied sports such as shooting, weightlifting and archery which seldom hit the back pages.
Tony Yee, who was initially brought in from The Star to write for the footy magazine Football, later joined us and be put in charge of the badminton beat.
Then Graig Nunis, brother of hockey legend Kevin, joined us from The Sun ahead of the 2001 SEA Games.
Before making his name as a critic and now owner of portal twentytwo13.my, Haresh began from the bottom, as a stringer-cum-law student tasked to cover schools at the desk and later joined us on a permanent basis, where he found good company in his contemporary Ghaz Ramli, who grew to become a motorsports expert and is now CEO of Badminton Association of Western Australia.
Satwant provided various angles and views on administration and management to a paper already established as a controversial tabloid. With the writers we had at the desk, we were guaranteed back page stories which were highly anticipated by the fraternity. Thanks to rewrite man Chan Wai Kong making us looked better than we actually were with his editing skills, we walked and talked as if we were God’s gift to Malaysian sports. 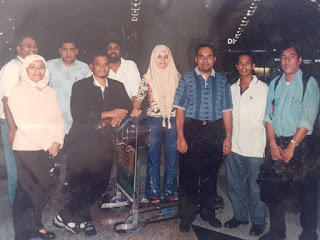 Satwant (standing, third from left in the background) with Fariq (second from left in the background) together with my siblings Kak Lin and Man plus my niece Aishah, sending off Khalid Redza (extreme right) and yours truly at the KLIA for an assignment - the Manchester Commonwealth Games 2002.
On good days, Fariq, Moose and myself would park ourselves at Satwant’s place in Bangsar just behind the office, drinking cans of Milo from his refrigerator, reportedly courtesy of his good office with Nestle, while discussing sports officials. There we used to poke fun at him because he had a car but could not drive. "You give your car to me la and we can make it the office car"!
Satwant’s articles usually drew a mixed reaction. We did not necessarily agree with his angles but that was the beauty of the paper then, that everyone was given the freedom to express our opinions, without fear or favour. 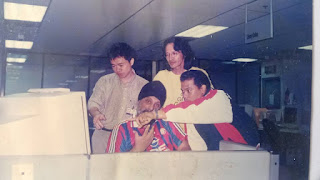 Tony Yee and Moose (in the backround) conspiring with yours truly to question Satwant's angle
At the desk, dissenting views were encouraged. And of course, we agreed to disagree to such an extent that Satwant and I stopped talking to each other even if we were seated side by side. On other days, we either yelled at each other or be yelled at but ultimately we had fun.
I first knew Satwant him when he was a sports officer at Yayasan Negeri Sembilan (YNS), managing the sports activities under the foundation’s auspices. I was then attached to the Berita Harian sports desk, covering hockey as and when, third in the ranking behind V. Ashok and Norbakti Alias.
As the officer tasked to manage and coordinate the YNS side, he was exposed to the rigours of managing a high-performing team that featured virtually the who’s who in Malaysian hockey.
With former Indian international captain and penalty corner specialist, Pargat Singh, former Malaysian skipper Sarjit Singh, Mirnawan Nawawi (Dato’), Arrifin Ghani, Soon Mustapha, Maninderjit Singh, St John Davis, Brian Jayhan Siva and S. Suriagandhi, Nor Azlan Bakar and K. Dharmaraj in the YNS stable, Satwant rose through the ranks as assistant and later team manager under the guidance of YNS director, Mustapha Kamil Mohammed.
YNS was ahead of their time, offering scholarships and monthly salaries to the team in the mid-90s to youngsters like Nasihin Nubli, Calvin Fernandez and M. Kaliswaran. Hockey was not their only raison d’etre. YNS had the vision to develop badminton and football through a scouting system then.
But it was hockey which put YNS on the forefront, reaching the pinnacle with a treble in 1996 at the end of the glorious year which turned out to be their last when Mustapha Kamil decided to quit, while Satwant joined the National Sports Council (NSC) as the hockey liaison officer.
After creating a huge impression with his write-ups and opinions, Satwant quit the Malay Mail in 2004 to join the then newly-minted Sports Minister, Dato’ Seri Azalina Othman Said as her special officer.
Following the medal drought at the Athens Olympics, Azalina rang changes. After he was dissuaded by Datuk Seri Ibrahim Saad from lobbying for the Malaysian Hockey Federation (MHF) secretary’s post, Satwant was made the head of AsiaCom, a project initiated to establish the highest achievers among the elite athletes, while Ibrahim as chairman.
As someone who had covered NSC since they were based at Stadium Negara, I realised much of NSC’s authority was usurped by Ibrahim and Satwant upon Azalina’s directive who wanted to create a parallel secretariat in order to undermine the NSC leadership.
I continued to be critical of Azalina's policies, which irked Satwant as he had gone to the other side of the fence. Often we debated on a lot of issues, governance or otherwise, virtually putting our friendship at stake.
But Satwant’s stint did not last long. Thanks to his connection with Khairy Jamaluddin, he was made the general secretary of UPB-MyTeam, in 2006. In 2007, Satwant was made the chief operating officer of MSL Sdn Bhd, FAM’s marketing arm, when Ibrahim was the FAM general secretary.
There was no doubting Satwant’s access to the movers and shakers in the sports industry. He shook them into moving things and making decisions, right or wrong. He created a whatsapp group, inviting  the likes of Tan Sri Norza Zakaria, Datuk Hamidin Mohd Amin, the late Datuk Seri Zolkples Embong, Datuk Ong Kim Swee, Datuk S. Sivasundaram and Datuk Dr Ramlan Abdul Aziz to discuss sports on a daily basis. 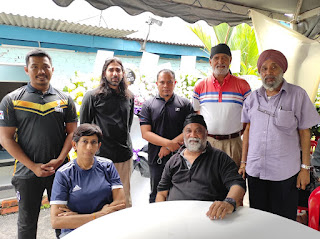 Standing from left, Bazly, Haresh, loose cannon with whatever hair left, Balbir Singh and a family friend. Seated former hockey international K. Maheswari and Ramaguru.
On the day of his funeral, I travelled to Tampin, to his late parents’ house, the same house I went to for a Deepavali do two decades ago. On my arrival, Stephen van Huizen, the YNS coach who later went on to become the national team coach, quickly recognised me and introduced me to his brothers Jusvir and Rejinder.
After paying my last respects, I was told by Jusvir that the house was renovated by Satwant. Jusvir who lived nearby was the first person to be called when Satwant collapsed while eating at the eatery just behind the house.
Later Haresh and missus Pearl Lee arrived, followed by Astro Arena's Bazly Azmi and former The Star hockey writer, S. Ramaguru. We were told the house continues to be a pit stop offering refreshments for anyone travelling through Tampin, a tradition started by Satwant's grandfather.
Ramaguru and Tony Mariadass were perhaps Satwant’s two friends who stayed with him through thick and thin until his last breath.
Satwant's final official job was a media consultant at OCM. He loved to tell me that he had completed a rare distinction of having worked at at KBS, NSC, OCM, FAM and MSL - a feat that may never be matched by any of us in the Malay Mail sports desk or even the present group of sports administrators.
Farewell Satwant, you made a mark in Malaysian sports. You will be missed.
Posted by rizal hashim at 8:39 AM No comments: