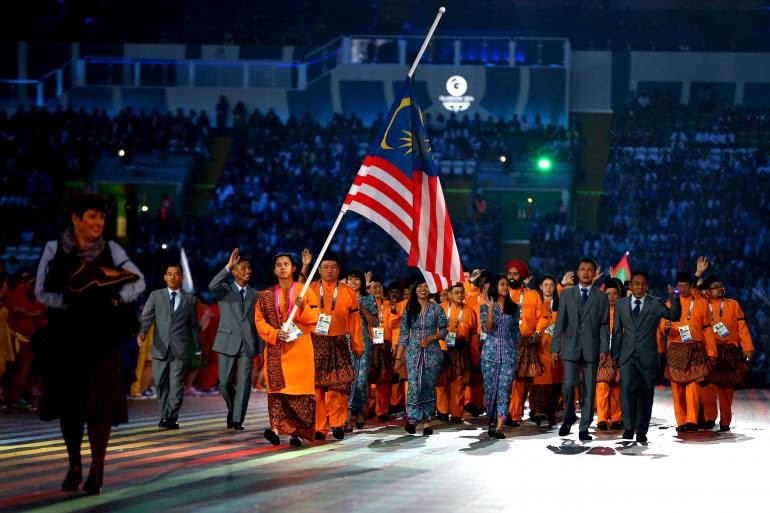 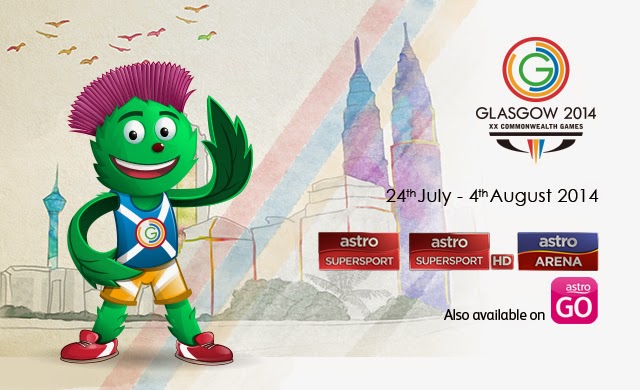 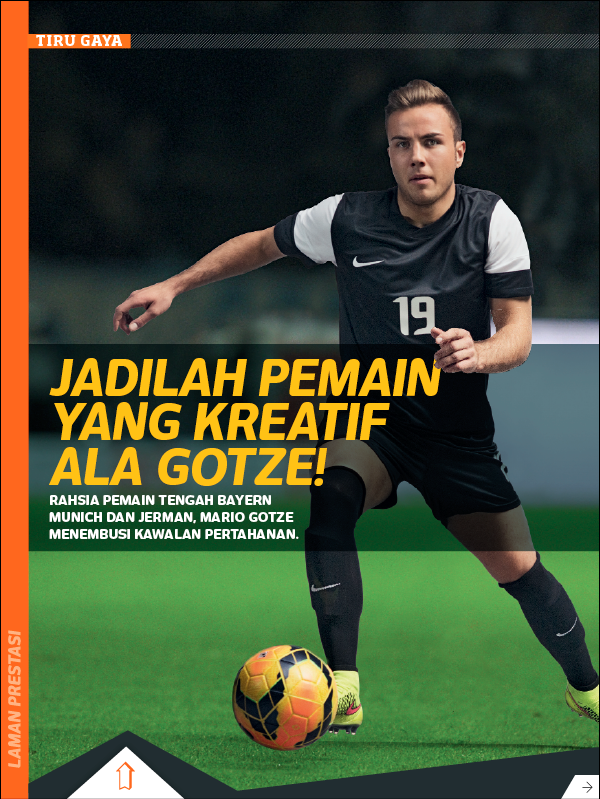 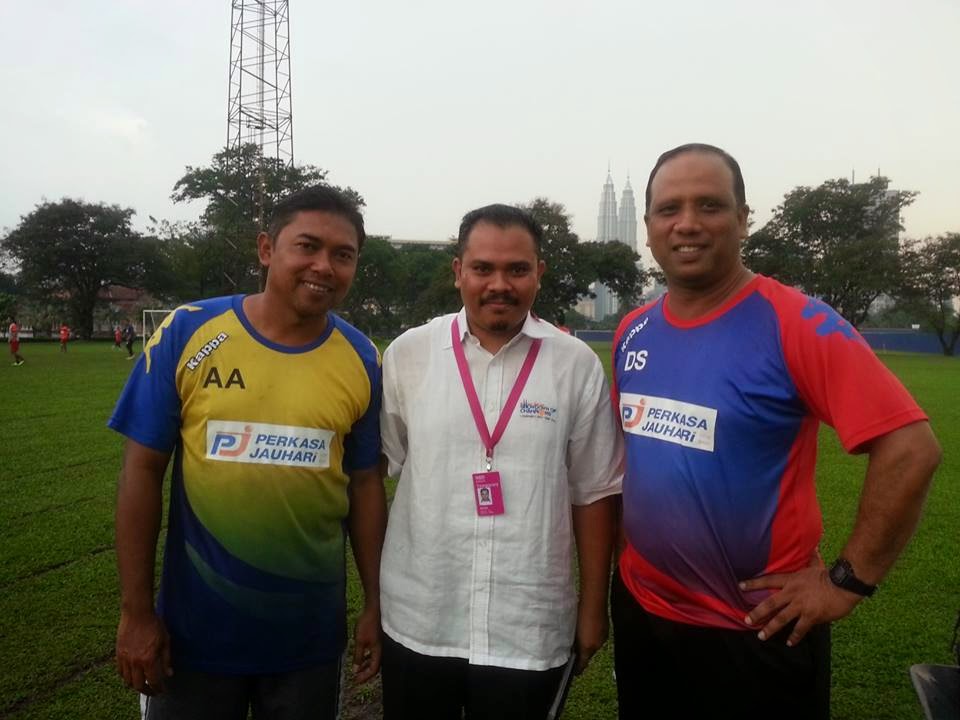 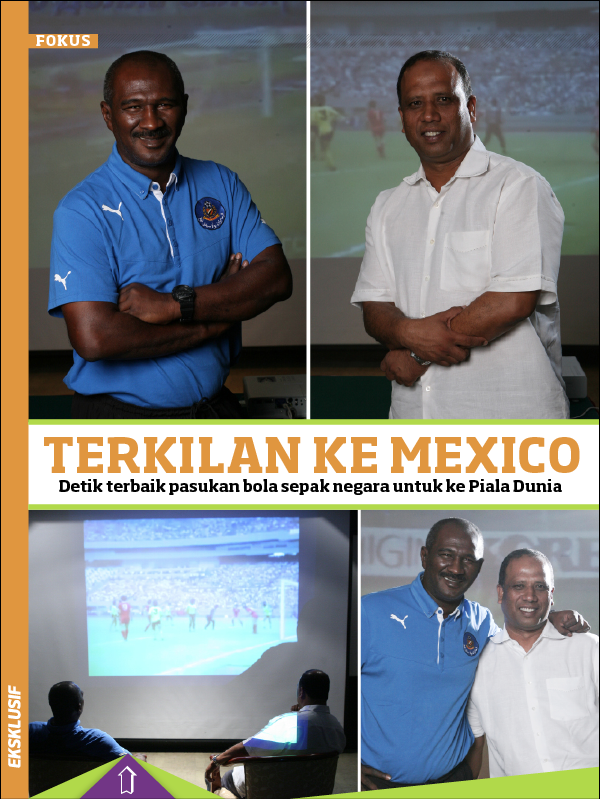 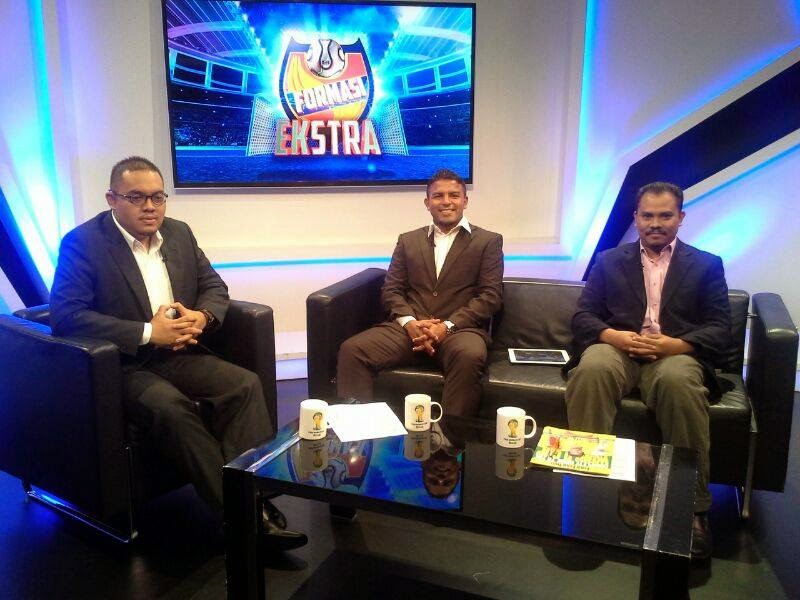 Posted by rizal hashim at 8:01 AM No comments:

Throughout the FIFA World Cup in 2010, loose cannon wrote for the Brunei Times, upon invitation from Allahyarham Juli Suharni Jaafar. Read here.

Four years earlier, loose cannon had a gala time expressing his views using a pseudonym throughout the World Cup in Germany...The Mailsport team brainstormed ahead of the tourney and came up with the idea of featuring invited columnists. But paying a king's ransom for Beckenbauer or other syndicated stuffs was beyond the paper. So it was suggested for the members of the sports desk to contribute..

One of Herr Blitzkrieg's rantings...

His Excellency Herr Jess, was pleased to say Germany and Malaysia have had a cordial working relationship in the world of sports for more than two decades.

"I remember when Bayern Munich came to Shah Alam in 1994, thousands of Malaysians watched them train. Our hockey team have participated in numerous tournaments in Kuala Lumpur and we have also exchanged programmes in football," said Jess.

Herr Blitzkrieg pointed out that a few German coaches had left a mark in Malaysia. Dettmar Cramer came to share his knowledge in Kuala Lumpur in the 1960s, while Karl Weigang guided Malaysia to the Olympic Games in Moscow, only for the country to boycott the 1980 edition.

In exchanging pleasantries, Herr Jess expressed his surprise as to why there was no German football on TV. Herr Blitzkrieg politely told Herr Jess that at one time there was Football Made In Germany way way back in the 1980s, when Englishmen Kevin Keegan and Tony Woodcock were plying their trade in Hamburg and Cologne respectively.

Apart from consuming American propaganda through the series Combat where the Germans were portrayed as a subject of hate, Herr Blitzkrieg's TV diet included Italian Soccer, Football Made In Germany, Brazilian Soccer as well as the barely palatable Big League Soccer and Star Soccer.

Based on their performance, Juergen Klinsmann's boys have stated a strong case for Bundesliga matches to be shown again on Malaysian screens. From Klinsi's starting 11, Jens Lehmann is the only foreign-based player, while Michael Ballack will only be joining Chelsea after the World Cup.

Talent is awash in Bundesliga. Astro SuperSport should lead the way. They have begun to show highlights of French football long after NTV7 and Jeffrey Ong gave up on it.

Too much English football, or the England team, is not good for the brains, one must remember.

Sven-Goran Eriksson's England helped Herr Blitzkrieg beat insomnia, and the English game has also helped produce a petulant yet talented player in Wayne Rooney, who will be bonded forever with Cristiano Ronaldo.

* Slowmental Riquelme, Sheva, Lamps and the Goofy One will be invited for a screen test for the hit TV series Lost.

* Football is orgasmic, to some of Herr Blitzkrieg's colleagues. No wonder because they allow themselves to be distracted from on the pitch activities. Joe Kampung gets thrilled by the commercials during half-time, Seeing Red cannot stop but ogle at the Brazilian girls while Latin lover El Loco loves to gush about panty-changing. In contrast, Van Gyzi gets excited by the odds, ringgit and sen. Don Catenaccio seldom gets his predictions wrong because he is linked to the underworld while Goalfinger is sadly clinging on to the notion that England can play like Brazil, Argentina or France. What has the world come to?

* Herr Blitzkrieg's days as a columnist are numbered.
Posted by rizal hashim at 8:31 AM No comments:

I thought Bastian Schweinsteiger, blood and all, performed like a true leader, a warrior, the day Germany lifted their fourth World Cup in Brazil. 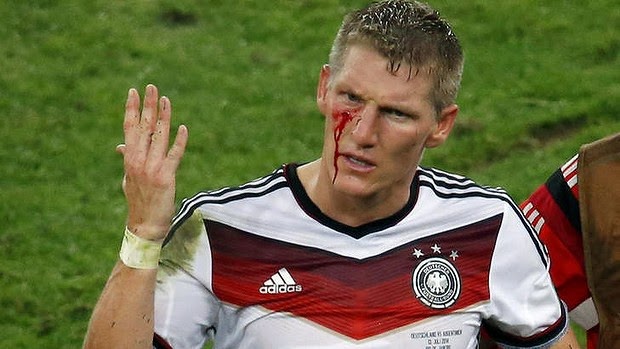 I was lucky enough to be on the stands when the Bayern Munich midfielder scored his first goals for Die Mannschaft, more than nine years ago. In conjunction with the World Cup in Germany, this article on German playmakers was published by the Malay Mail on June 7, 2006, under the heading I gave...

YESTERDAY the Teutonic instincts were driven by Gunther Netzer and Bernd Schuster.

Today it's all about Michael Ballack.

Tomorrow shall belong to Bastian Schweinsteiger. On a chilly night at Borussia-Park in Monchengladbach exactly a year ago (June 8), this scribe was privileged enough to witness Schweinsteiger's first two international goals in a German shirt.

Before a capacity crowd of 46,228, Schweinsteiger's prodigious talent was there for all to see. Trailing to an Alexander Anyukov goal in the 26th minute, Germany equalised five minutes later through a well-worked move sealed by a goal that bore Schweinsteiger's signature, a low shot that was deflected into the right corner of Sergei Ovchinnikov's goal.

Fielded on the left flank, Schweinsteiger notched his second of the evening by placing his shot inside the near post after slaloming past two Russian defenders on the edge of the area in the 70th minute.

The two moments of inspiration established Schweinsteiger's reputation as Germany's latest poster boy, following in the well-beaten path paved by Netzer, Schuster and Stefan Effenberg, just to name a few.

An exciting attacking midfield prospect and notorious bad boy, Schweinsteiger's reputation, just like his illustrious predecessors, precedes him. He was once caught in a disco on the eve of a game, fined for speeding and in a bizarre incident, was caught with a girlfriend in the whirlpool at the Bayern training ground in the middle of the night.

On the pitch it's hard not to notice Schweinsteiger, always the livewire either on the left flank or in the middle of the park, an area currently reserved for the talent of Chelsea new signing Ballack.

Once Ballack quits the Nationalmannschaft, Schweinsteiger, whose name means pig climber in English, will no doubt be his natural successor. His playing style is a throwback to the glorious yesteryear when Netzer, along with Franz Beckenbauer, personified the elegance not usually associated with German football.

When others were methodical and mechanical in their approach, Netzer was the rebel, the artistic maverick with the flowing blond locks, the footballer frequently photographed at the wheel of a sports car.

The image of Monchengladbach-born Netzer striding forward, long hair glinting in the floodlights became a symbol of German football. He was able to spray long, hard passes all over the pitch with devastating accuracy.

The tradition was continued by Schuster, the enfant terrible in the 1980s. Brilliant at club level, the Blonde Angel never really fulfilled his potential in the black and white of the national team. Differences with the coach, Jupp Derwall, kept him on the outside of the `Mannschaft' and his personal caps tally stopped at 21.

Effenberg, languid and elegant, compiled 35 caps and scored three goals for the German national team. He will be remembered most for showing the finger to the whistling crowd during a 1994 World Cup match against South Korea.

Please accept my apologies for not having updated this blog for almost 10 months. The ongoing FIFA World Cup in Brazil has given me a reason to muster enough energy in my zombie-like existence to pen a few words. Since loose cannon last wrote the Malaysia Cup final review, a lot has happened obviously.

First and foremost, loose cannon was invited to write for the renowned footy mag, Four Four Two, the Malaysian version of course, in January. An honour indeed. 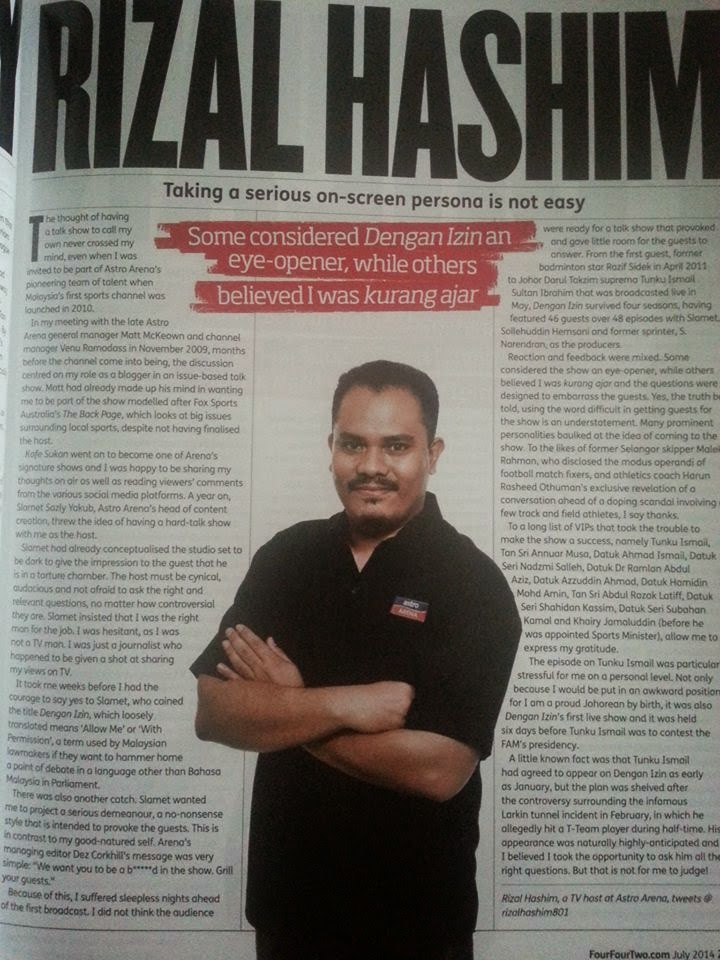 In the latest issue, the managing editor, Lee Seng Foo, suggested loose cannon to write about Dengan Izin, the hard-talk show mooted by Slamet Sazly Yakub, who comes up with ideas on the magazine shows over Astro Arena

Since early May, I have a new task. As editor of Arena E Mag, published or produced by Astro Digital Publications Sdn Bhd. 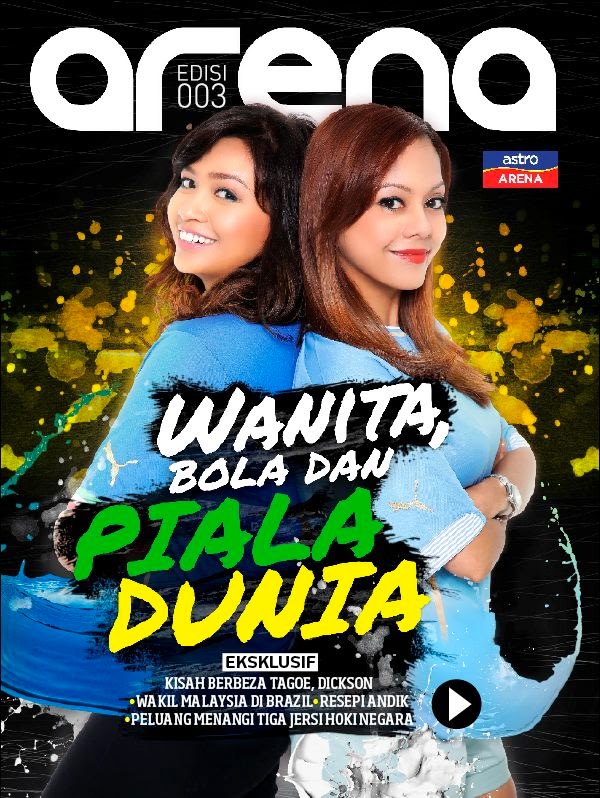 The E Mag provides loose cannon the opportunity to explore another realm, where video, text and pictures are combined as one to cater to the young and tech-savvy audience. As a freelance editor, loose cannon gives himself a year to helm the E Mag under the watchful eye of managing editor, Datuk Hishamuddin Aun, before walking away into retirement. It could be earlier, if loose cannon's mid-40s psychological and physical state do not permit.

Throughout the entire World Cup season, loose cannon is slated to appear on 18 occasions as a pre-show, half-time and post-match pundit. It's loose cannon's third successive stint following Euro 2012 and the Confederations Cup in 2013. 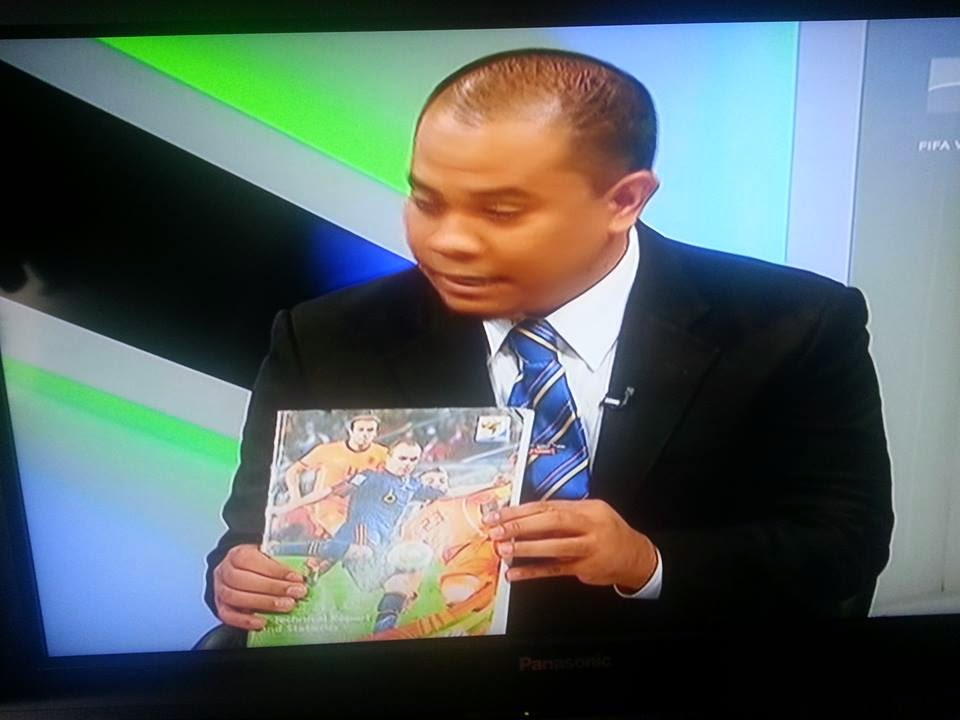 Shortly after the Dutch massacred Spain 5-1, loose cannon said while holding the 2010 FIFA World Cup technical report: "This goal by Iniesta in the 2010 now belongs to the museum. This defeat marks the beginning of the end of an era" 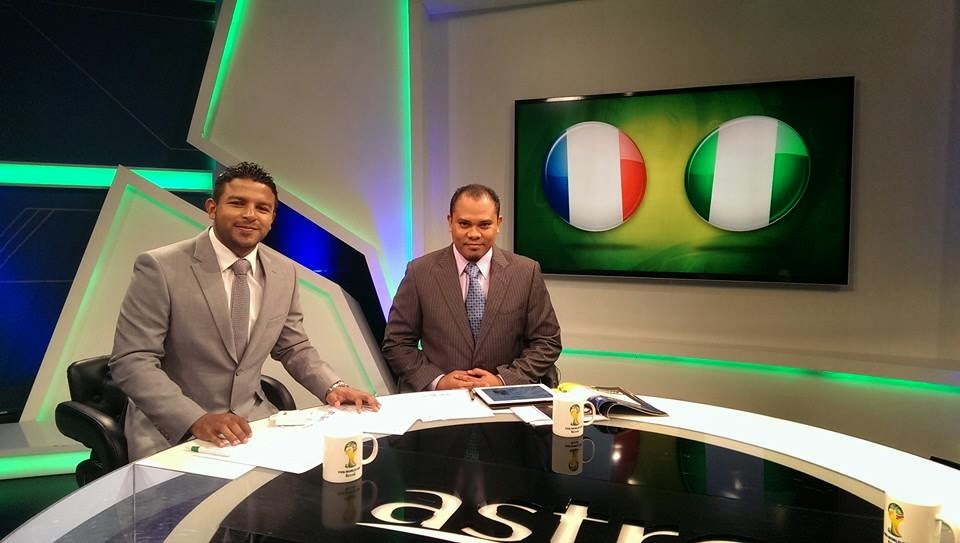 Former KL and MyTeam attacker Stanley Bernard Samuel has gone a long way since loose cannon covered him more than a decade ago. He was a member of the national Under-17 side helmed by Zainal Abidin Hassan and I covered the team extensively for the Malay Mail. Stanley has what it takes to make it as a serious football analyst. 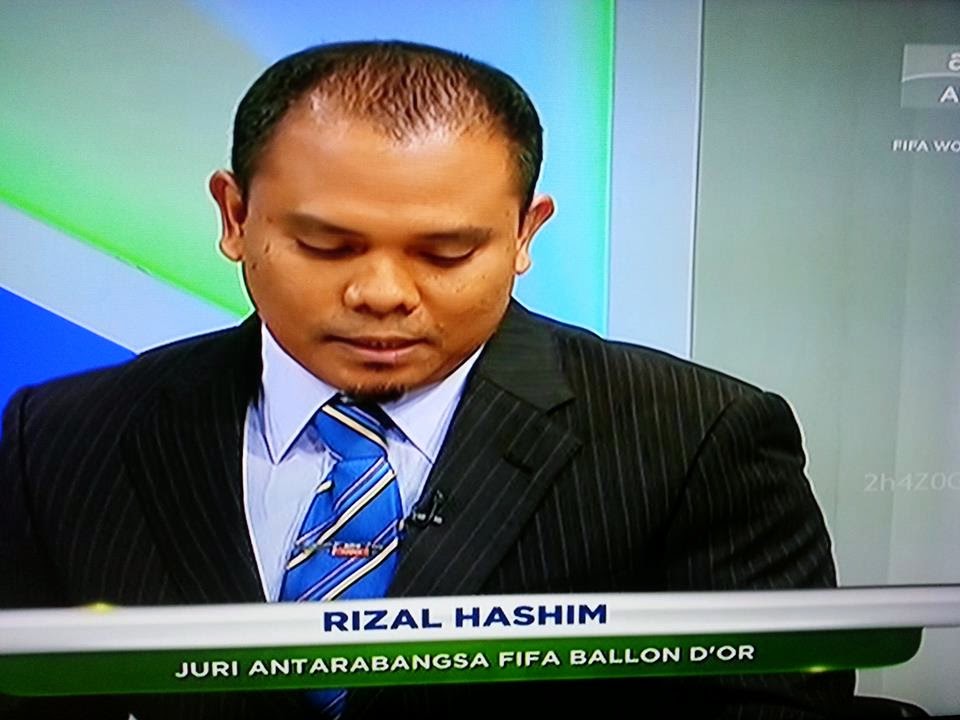 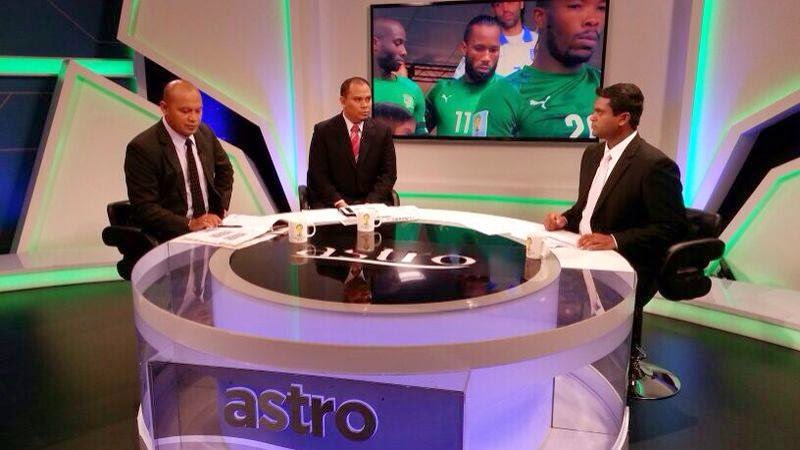 With Burn as host and former national defender Asmawi Bakiri as fellow pundit. Asmawi was a player at the Shah Alam Section 11 Project School whom I had the pleasure of interviewing in 1992. Graduated through the ranks to play for Selangor and the national team under Abdul Rahman Ibrahim. Now a regular feature of Astro Arena football shows. 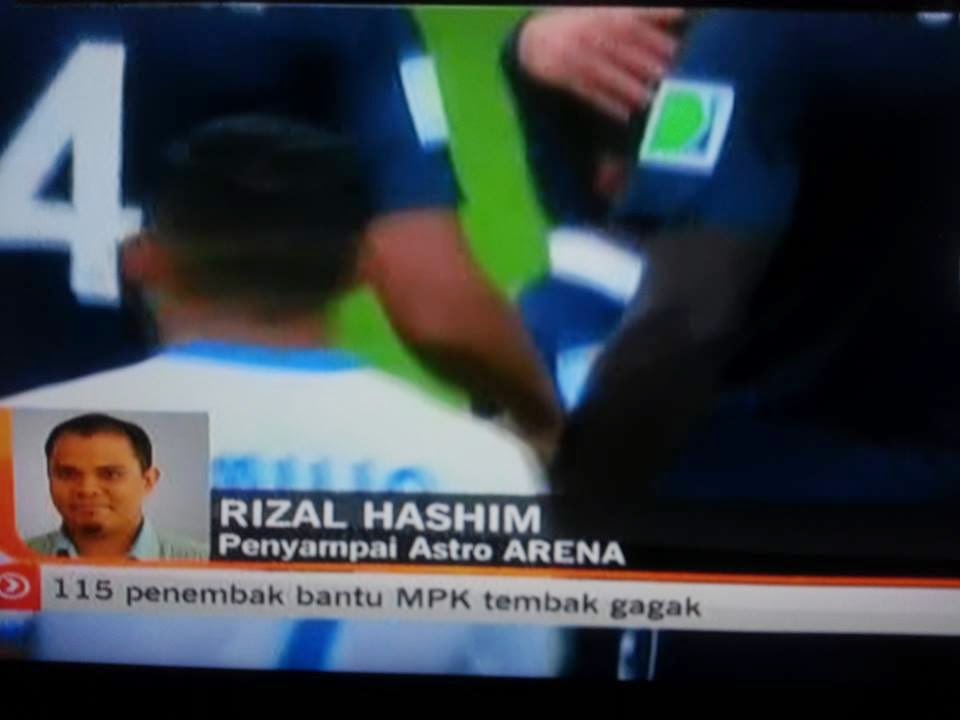 But on one of the live afternoon's news segment, loose cannon's mind went blank, not being able to remember Netherlands' opponents in the second round...what an embarrassing moment!

Ahead of the World Cup, loose cannon was contacted to appear as a guest of Persepsi, a talk-show of Islamic-based TV station Alhijrah. Appearing beside Sports Minister, YB Khairy Jamaluddin, was indeed a privilege. 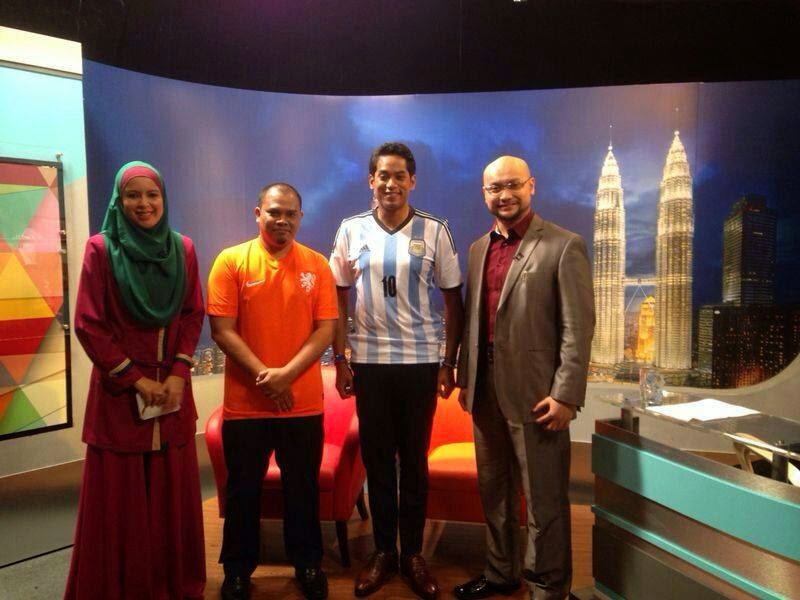 Why is that loose cannon appears to be shorter than everyone else? But seriously having KJ saying "Rizal is a thinking journalist" indeed made loose cannon's day hahahahah. The topic was Mutu Sukan Negara and loose cannon was introduced as Personaliti Astro Arena. Persepsi is on every Monday and is hosted by Badrul Sani and Farhah Ruslan.

Surely the icing on the cake was loose cannon being featured as a guest in the GOOOL daily insertion of Harian Metro, the highest-selling Malay newspaper in the country. 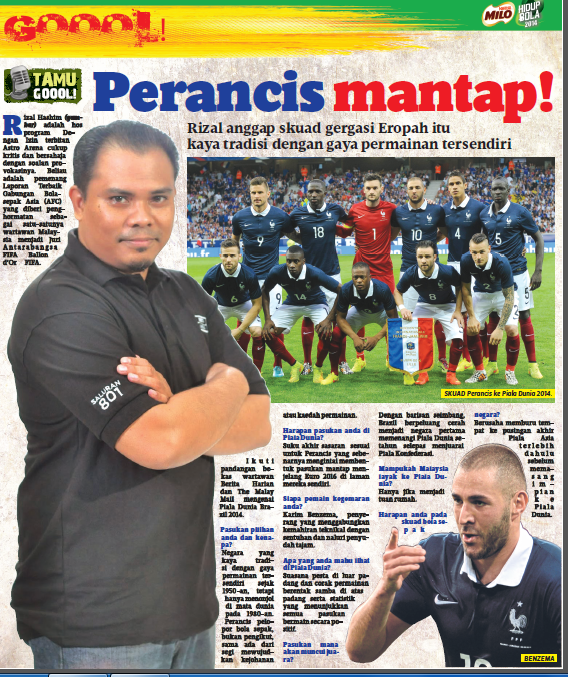 For 20 years loose cannon spent his journalistic days waxing lyrical or offering opinions on people. Certainly a nice change. Someone commented how could they blow up loose cannon's picture bigger than that of Karim Benzema hahaha

Also being featured on Unreserved along with KJ, Jason Dasey, Abbas Saad and Shebby Singh was an honour too. Thank you Dazman. 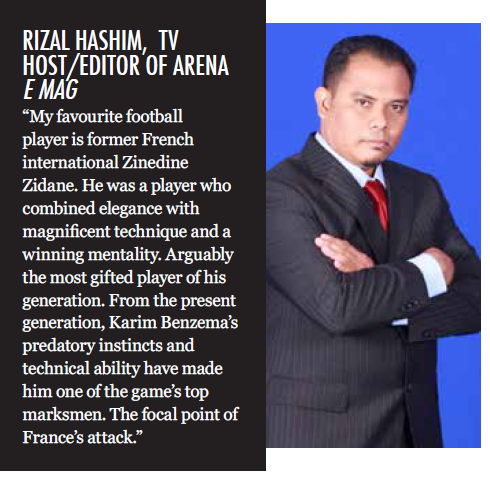 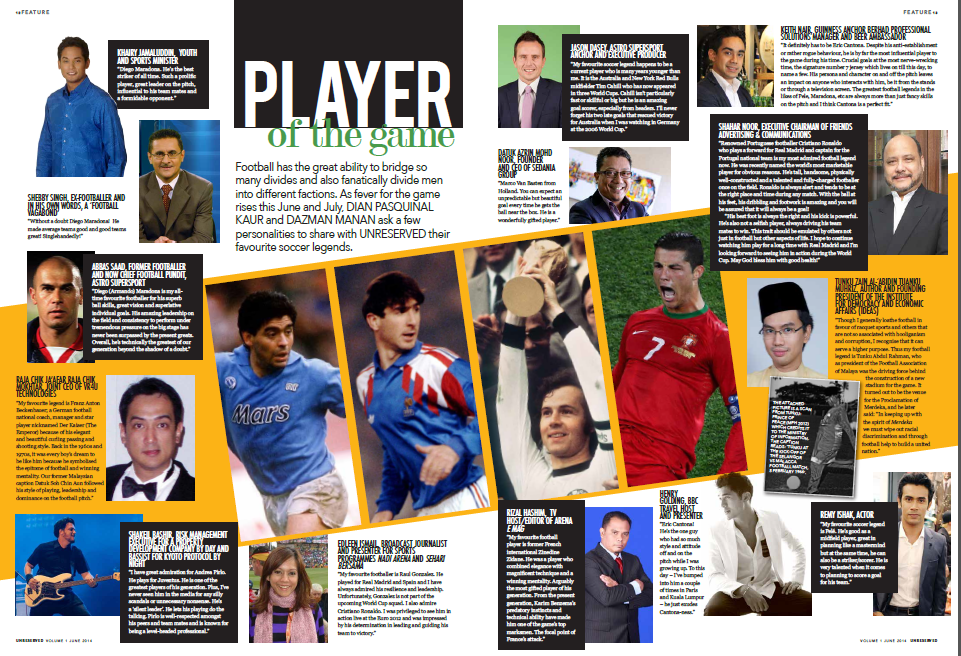 Loose cannon thanks Allah for the blessings. Have a blessed Ramadan to all.