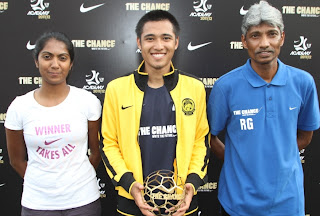 
NIKE MALAYSIA ANNOUNCES MOHAMMAD ZAKY B. ZULKIFLI AS THE CHANCE WINNER IN MALAYSIA

KUALA LUMPUR, 6 October 2010 – Nike Malaysia today announced Mohammad Zaky B. Zulkifli as the winner of The Chance in Malaysia who will represent the country at the Global Trials in London next year.

Playing under the watchful eyes of Arsenal FC manager, Arsene Wenger, Mohammad Zaky B. Zulkifli will join 99 other footballer from 40 countries with the hope of being one of the selected eight that join the Nike Academy, a high performance training program supported by the Premier League in England.

The announcement was made at The Chance final camp held at Bukit Jalil and was attended by Kelly Sathiraj, Assistant General Secretary, Football Association of Malaysia and national team coach K Rajagobal.

“The Chance is a wonderful program that affords young footballers the opportunity to take their first step towards playing football in a professional level under the under expert guidance from coaches like Arsene Wenger. The Football Association of Malaysia congratulates Nike Malaysia on their efforts to develop and bring football to a level that is on par with the powerhouses of the game in this region,” said Kelly Sathiraj.

Launched in September, The Chance in Malaysia saw more than 500 talented young players attending open trials in Kuala Lumpur, Kuantan, Penang and Pasir Gudang with national team coach K. Rajagobal and his panel of coaches having the arduous task of selecting the top 30 players to attend the final camp held on 5th and 6th October at Majlis Sukan Negara, Bukit Jalil.

“Throughout theses trials, we saw a lot of young talent within the Malaysian football community. The players were put through physical, mental and agility testing and we closely scrutinized them in these disciplines. The overwhelming response to the open trials showed that Malaysia is not short of football talent,” said coach K Rajagobal.

“The program is certainly a boost for Malaysian football as it gives our young players the chance to prove their worth and possibly excel at the highest levels of participation. It brings out that drive and determination showing how badly the Malaysian youths wanted this chance,” he added.

The 30 selected players who attended the camp were put through physical and physiological tests by the experts from the National Sports Institute to assess their speed, stamina and mental endurance. Apart from this, the players also had to undergo football skills tests for the panel of coaches to evaluate their technical football abilities as a silo player and as part of a team. The tests were conducted with the aim of indentifying player with the right balance of physical and mental strength that will enable him to compete on a global level with his compatriots at the trials in London .

Staying true to their commitment to grassroots development of football, Nike Malaysia believes that The Chance is a recognizable platform for not just scouting youth potential, but also to develop the young football spirit in Malaysia and bring out the fullest of their capabilities.

“With the selection complete, we are proud to announce Mohammad Zaky as the Malaysian representative at the Global Trials where he will ply his trade with Arsene Wenger watching closely – this is the chance of a lifetime for any footballer and we believe that Mohammad Zaky will do the country proud. The Chance is a reinforcement of Nike’s ongoing efforts in developing and recognizing youth talent, whilst contributing to the football community in Malaysia ” said Menaha Nadaraja, Country Market Manager for Nike Malaysia .

Mohammad Zaky B. Zulkifli, hailing from Johor, attended The Chance open trials in Pasir Gudang and was one of the 8 players selected from the Southern region to attend the final camp.

“It has always been a dream for me to become a professional footballer and thanks to Nike I am now presented with this golden opportunity to take that first step towards achieving my goal,” The Chance winner Mohammad Zaky excitedly commented.

He also added, “I am truly grateful for this chance that Nike has awarded me with and I hope to write my future by qualifying to be one of the eight that is chosen for the Nike Academy ”

As members of the Nike Academy , players become full- time participants at a residential training centre in England with access to elite coaches, nutritionists, psychologists and fitness conditioners in addition to the world class facilities to perform at the highest level
The eight who are chosen will have their expenses paid to live in the United Kingdom for a year starting in July 2011 and be enrolled as a full time member of the Nike Academy .

The Nike Academy offers non-contract players unattached to professional clubs a chance to enter the professional game through world-class coaching and games against the elite academies and professional reserve teams. Since the academy’s start in 2009, eight players in the UK have received professional contracts.
Posted by rizal hashim at 9:37 PM

Hope this boy will attract eyes of the abroad coaches. Love to see representative from Malaysia, at least, play in top division at any European countries.

its bullshit...empty promises. where does Arsene Wenger get the time to monitor all these? common lads...he has his own tight and heavy responsibilities to supervise the premier side. do you think he has time for all these? wat a joke...enough of fake promotion