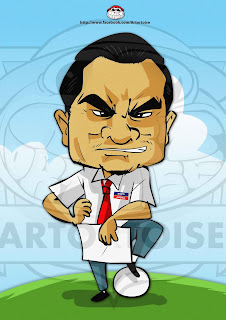 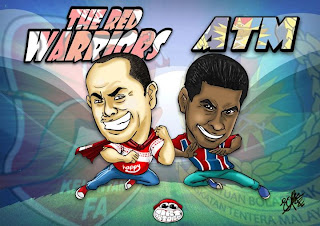 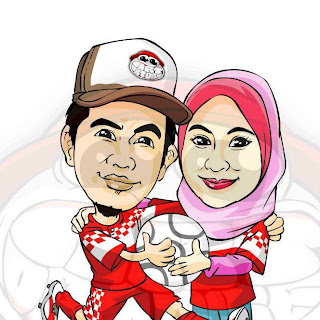 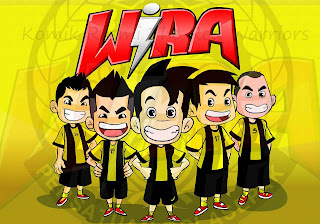 
Posted by rizal hashim at 5:21 AM No comments:

When will Sports Minister make changes that will benefit sport? Former DG Mazlan had vision but currently we are groping in he dark....
— Satwant Singh (@SatwantDhaliwal) July 26, 2013

@HareshDeol @Khairykj So even with new Minister we have to fear Mentor Minister?
— Satwant Singh (@SatwantDhaliwal) July 23, 2013

@HareshDeol if never lobby then how to protect his interest and goons lah? And I thought @Khairykj had this curtailed. Siapa Menteri?
— Satwant Singh (@SatwantDhaliwal) July 23, 2013


NSC DG says I have agenda on MHC. Well if I talk then he best start packing. Do not think you are untouchable. Mazlan was more transparent.
— Satwant Singh (@SatwantDhaliwal) July 22, 2013


Lets rally for former NSC DG Dato Wira Mazlan as MHC CEO. He will do a good job. If not MHC then BAM as he has a Midas Touch
— Satwant Singh (@SatwantDhaliwal) July 19, 2013 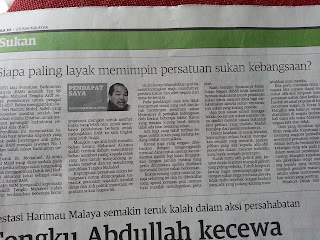 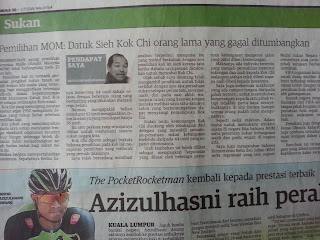 Posted by rizal hashim at 8:27 PM No comments:

The Malaysian Open, Kuala Lumpur, an ATP 250 tournament announces that two Grand Slam finalists, the ever-popular Marcos Baghdatis and future star Hyeon Chung of South Korea, will participate in the US$984,300 tournament to be played at Stadium Putra, Kuala Lumpur from September 21 to 29, 2013.

Baghdatis will be a direct entry whilst 17 year old Hyeon will receive the first main draw singles wild card.

Marcos Baghdatis has been ranked as high as No.8 in the world and has been a finalist at the Australian Open. The often smiling Cypriot is a favourite with Malaysian fans and returns to KL after getting married and becoming a father last year. 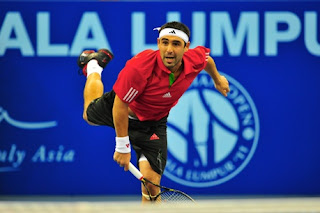 He has won four career titles and reached another seven ATP finals. This year Marcos has suffered with injuries to his foot and shoulder, but still managed to reach the semi-finals in Brisbane, beating Gilles Simon and Florian Mayer, and the quarter-finals at the ATP 500 in Rotterdam.

“Kuala Lumpur has been a special event for me and I have always really enjoyed playing there – the tournament fans and staff are so welcoming and friendly, just like being at home. When I was in the final they really gave me so much support, which I remember well, so I am really looking forward to coming back to Malaysia,” said Baghdatis.

Every year Marcos has played the Malaysian Open, Kuala Lumpur he has improved his standing – in 2009 he made the second round, in 2010 the quarter-finals and in 2011 he played that great final against Janko Tipsarevic. Currently ranked 44, he has career wins over Andy Murray, Juan Monaco, Lleyton Hewitt and Andy Roddick while in 2010 he had the unique experience of beating Roger Federer and Rafa Nadal when they were both No.1.

Hyeon Chung, who reached the junior Wimbledon final earlier this month, is already being tipped to follow in the footsteps of the current Asian No.1 and world No.11, Kei Nishikori.

“It is an honour for me to accept a singles main draw wild card into the Malaysian Open, Kuala Lumpur, an ATP World Tour event that takes place close to home in Asia - and one that has such a quality reputation amongst the players,” said Chung.

“I am touched that my run to the final of the Wimbledon juniors has afforded me opportunities such as this and would like to thank the Tournament Director and IMG for supporting me. The experience will be very valuable and I am very excited.” 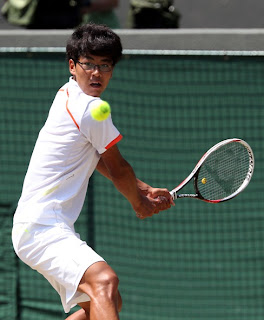 His run to the final of junior Wimbledon was shown live on national television in South Korea causing the TV ratings to soar, as he caught the imagination of sports fans in his home country.

The 17 year old right-hander is based for much of the year at the IMG Bollettieri Tennis Academy in Florida and was earmarked for big results since the age of 12, when he won titles at prestigious junior events like the Orange Bowl and the Eddie Herr International.

Tournament Director Nick Freyer, of organisers IMG, said: “We are always touched when a quality sportsman like Marcos returns to KL year after year. He feels comfortable with all that we do for the players. The admiration is mutual, as for the tournament staff, it is like welcoming home an old friend.

“Hyeon is currently the 13th ranked under 18 player in the world and is certainly a youngster to watch. He is genuinely deserving of this wild card as we continue with our tradition of supporting local and Asian players. He follows in the footsteps of Kei Nishikori, and India’s Yuki Bhambri - who will return to KL play in the qualifying competition - and Jimmy Wang of Taiwan who have all progressed up the rankings since we helped them at a young age.”

A number of wild cards will also be provided to local players with the names to be confirmed by the Lawn Tennis Association of Malaysia and the tournament in due course. The Malaysian Open, Kuala Lumpur is sanctioned by the Lawn Tennis Association of Malaysia. In addition to the distinguished support of the Ministry of Tourism and Culture, Malaysia and Tourism Malaysia, the event is proud to have prestigious commercial sponsors that include Rado, CNN International, the DoubleTree by Hilton Kuala Lumpur, Wilson, 100 Plus, the Albukhary Foundation, Astro, Starbucks, the ATP World Tour’s Premier Partner Corona, and Platinum Partner Ricoh.

Tickets prices remain very reasonable and range from RM 10 to RM 120, and there will be free admission between Saturday, September 21 and Tuesday, September 24. Tickets can be purchased on-line via the tournament website http://www.malaysianopentennis.com/2013/tickets.php, at TicketCharge outlets or through the ticket hotline at TicketCharge Ph: 603-92228811

For more information on the tournament, visit www.MalaysianOpenTennis.com

Posted by rizal hashim at 10:31 AM No comments: 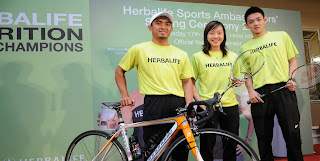 It includes nationwide publicity rights and various joint promotional and corporate social responsibility activities as well as sports programmes with the ambassadors. The athletes are recognized for their progress and track record in their respective sports as well as being inspiring personalities on and off the sports arena.

Mr Sridhar Rajgopalan, Sub-Regional General Manager of Herbalife Malaysia & Singapore said, “We are extremely proud to partner and support these homegrown athletes in optimizing their personal nutrition programmes as well as advocating to the wider community the importance of an active, healthy lifestyle supported by good nutrition. The occasion marks yet another important milestone not only for Herbalife in Malaysia, but also for our three Sports Ambassadors who have shown exemplary performance and progress over the years, and will continue to display high-spirited sportsmanship in the years to come.”

Low, a national squash player, reciprocated, “It is just the beginning of my squash career and there’s so much more to achieve in the future. Herbalife has supported me in my nutritional programme in the past and I am truly thankful and honoured to be part of the Herbalife team again.”

Mohd Azizulhasni Awang, a national cyclist, commended Herbalife Nutrition, “Good nutrition support is especially important for athletes like us who are constantly in training or competitions. I have been incorporating Herbalife nutrition products in my intensive training regime and am happy with how they have helped in my sports nutrition needs in order to perform better than ever, and to earn my nickname, Pocket Rocketman!”


Posted by rizal hashim at 1:17 AM No comments:

Instead of stopping politicians or royalties from holding positions in NSAs, KBS should look into limiting their terms of office
— rizal hashim (@rizalhashim801) July 6, 2013