My ex-boss Tony Mariadass must be congratulated for having organised a gathering for footballers of yesteryears recently. Read his blog here and the wide coverage in the mainstream press here, here and here 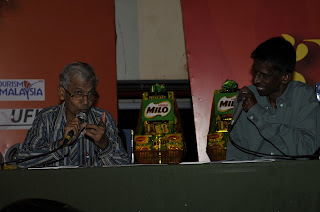 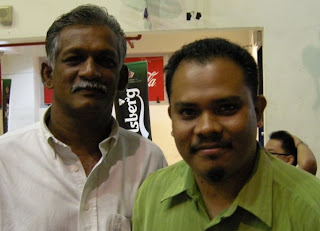 He came up to me uttering "I love your show...Dengan Izin", "are you John Engkatesu..."Yes"...aha we spoke over the phone a few years back, I asked you about your daughter, Juliana..."Ah, you remember"...I remember a poster of you and the Selangor team in Dunia Sukan...tapi dulu rambut you kerinting...hahaha 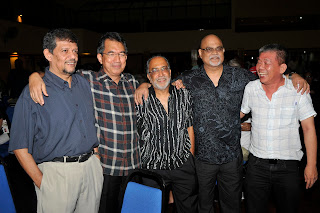 Legends in their own right, from left Bill Tegjeu, Datuk Fauzi Omar, George Das, Lazarus Rokk and Png Hong Kwang. To enter the pre-editorial training scheme at NSTP, applicants were required to write an essay...I wrote mine in English, mentioning two names - Adibah Amin and Fauzi Omar - as the most influential figures in my life. Really. Bill, always the quiet one, at the NST sports desk. Rokk, ah you either love him or hate him. Fauzi and George share the limelight in Old Songs Still Play while Rokk rolled back the years in a farewell piece in his Counterpoint column Thanks for the good times, guys. Png, who was the brains behind news portal Malaysian Insider, covered the Malaysian football team at the heights of their power 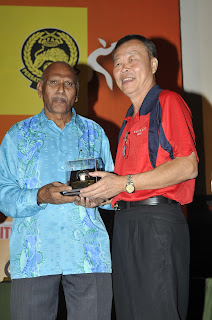 Datuk M. Kuppan, coach of the 1976 squad, said Supermokh trained, trained and trained, while legend has it Datuk Soh Chin Aun used to sleep wearing the full gear so that he would go straight to the padang and not be late for training the next morning... 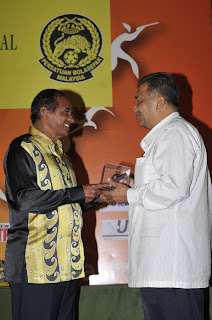 In a football match in Seremban, Datuk Peter Velappan was a player. The referee was my father. Bahwandi Hiralal, right back of the 1972 squad, was in the thick of the action at the Memali tragedy in 1985 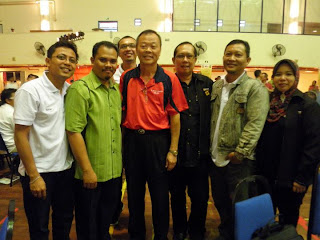 Isam (extreme left), Ramlan (third from right) and Zulfikar (second from right) know me well, because very few bother to ask for microfiche, a film-negative like sheet that contains archived stories, from the NSTP resource centre! I asked Datuk Soh, eh Datuk are you sober ah? "No lah, I'm Soh Chin Aun" ahahaha
Posted by rizal hashim at 10:03 PM

I love your show "Dengan Izin" too. But for improvement bro Rizal, when you ask questions...please let the guest answer first then only you interrupt with the following questions. sometimes when I want to listen to the answer, pup...you already interrupt and give the next question.but...sometimes it's good if you do that especially when the guest try to hide the facts or jawab melencong..hahah kasi panas sket.

btw, it's just my 2 cents...u have more experience as a journalist/host...so u know better! the most important thing is that the info we get from the show is marvelous. Keep it up bro.

Rizal, thank you very much for your kind acknowledgement!

Rizal, thanks a million for taking us down the long and twisted memory-laden road.