Exactly a month from today, we will celebrate the puasa month, but that does not mean the post-Euro 2012 will be a quiet affair. Far from it because a football feast will be served for fans of the English game.

English Premier League (EPL) champions Manchester City will make their first ever visit to Malaysia during their pre-season tour this summer.

The Citizens will be travelling to Kuala Lumpur straight from China where they will have played Arsenal at the Beijing Bird’s Nest Stadium on July 27.

Manchester City will meet K. Rajogobal’s Malaysian Select XI on July 30 at the National Stadium. The match is organised by the Football Association of Malaysia (FAM) and promoted exclusively by ProEvents International Sdn Bhd.

"We are very honoured to shoulder the responsibility of hosting Manchester City as we are the only South East Asian country given this opportunity," said HRH Tengku Abdullah Sultan Ahmad Shah, the deputy president of the Football Association of Malaysia (FAM). 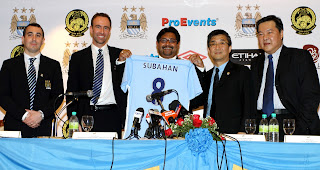 Manchester City Interim Chief Executive Officer, John MacBeath, said: “This visit is hugely exciting for Manchester City. It is clear that there is significant appetite for the Premier League in Malaysia, and we are very excited to taking our talented squad there to put on a sporting spectacle for our fans in South East Asia to witness the fans excitement first hand will be a fantastic experience.”

After arriving in Kuala Lumpur, the Arsenal first-team squad will take part in an open training session at the National Stadium, Kuala Lumpur on Monday, July 23, an event which was attended last year by over 30,000 people.

On Tuesday, July 24, Arsenal will play a match against a Malaysia XI, once again in the National Stadium Bukit Jalil, Kuala Lumpur, kick off 9.45pm local time. The visit to Malaysia is the first leg of Arsenal’s 2012 Tour. After the match in Kuala Lumpur, the Gunners will be travelling to China, to play against Manchester City in Beijing on Friday, July 27, and then the team will be visiting Hong Kong for a match against Kitchee FC on Sunday, July 29.

Arsenal Chief Executive Ivan Gazidis said: “Further to the overwhelming success of our visit to Kuala Lumpur in 2011, everyone associated with Arsenal is very excited to once again be visiting Malaysia this year.

“We are delighted that our many loyal fans in Malaysia and neighbouring regions will again have the chance to see their team in action live.

"We had a fantastic time in Malaysia last year and we are all looking forward to visiting this great country and meeting its wonderful people again in July.” 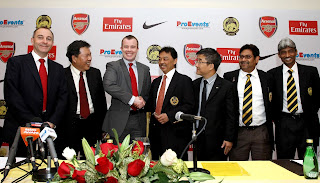 "SHAME ON YOU FAM"
Once again FAM has failed miserably when comes to developing the ability to play soccer at the national level.

Allowing teams from EPL to come here and play will not in any way improve our standard of play besides riding on the glamour which comes with it.

When are we going to learn and stop taking Malaysian for a long and winding ride. Almost thirty years has gone by, and still no major success at Asia level.

The final nail on the coffin will be the Asia Cup for FAM. Obviously raja's team will not make it.

What after that? Are they going to come up with false hope again...? and for how long is these going to go on?
Are we able to change anything at all? Or we are willing to be fooled by them.

I once again repeat my stand...!
To save Malaysian Football, we need to go back to Semi-Pro. Suspend and revamp the competitions. The time has come for us to take a backward direction to repair the damages that they have done all this while.