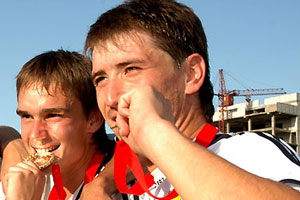 Murzaev
Kyrgyzstan is an unknown entity among us. Coach K. Rajagobal claims to have little knowledge of the team.

Asian football experts though have noted the potential threat posed by Mirlan Murzaev and Anton Zemlyanukhin. The two young strikers could wreak havoc to our Asian Games prospects.

Murzaev was named the Most Valuable Player of the 2010 AFC President’s Cup in September despite his team Dordoi Bishkek losing 1-0 to Myanmar's Yadanarbon in the final at Youth Training Centre.

Murzaev scored five goals in last year’s tournament and spent six months at Lokomotiv Moscow. The 20-year old has the ability to hold up the ball in attack and create chances for others.

Zemlyanukhin plays for Taraz FC in the Kazakhstan league, on loan from Turkish side Giresunspor. 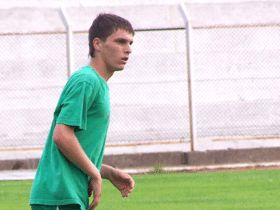 Zemlyanukhin
Captain Norhafiz Zamani Misbah and Muslim Ahmad will have their work cut out when they troop onto the pitch at Huadu Stadium Monday afternoon!

Thanks Pavel Luzanov, for the info.
Posted by rizal hashim at 6:14 PM