It was raining cats and dogs that day. It was my first time at Wisma Ali Bawal 2, Jalan Tandang, Petaling Jaya, which was to be Astro Arena's office-cum-studio. It did not resemble an office at all, with the office cubicles barely being set-up.

Accompanied by former cricketer and Astro Arena channel manager, Venu Ramadass, I waited for quite a while before a gentleman, soaking wet with an umbrella at hand, introduced himself.

It was probably in September 2009 when Saniboey Mohd Ismail and approached me for a possible role in Astro Arena. I was supposed to meet Matt McKeown shortly after that but due to various commitments, our meeting was postponed a few times.

"I heard so much about you," he said.

"I hope only good things," I replied.

He told me of his plans for an issue-based talk show with a resident blogger as a permanent feature. They had not identified the host but they wanted me to be part of the show modelled after Fox Sports Australia's The Back Page which looks at big issues surrounding Aussie sports.

Matt was on a recruitment drive, head-hunting for the best sportscasters and several names were bandied about to helm Kafe Sukan, namely Zainal Abidin Rawop, Hafizal Hamad, Tabah Sazwan Othman and Akbar Sahari.

"The idea is to eventually broadcast Kafe Sukan live and have an interactive discussion in the cyberworld," he said.

I did some background search. The next time I met him weeks later, we exchanged good-natured banters.

"Aha Matt, I didn't know you play golf. Wah not bad ah, you are member of the Australian Golf Industry Council." "So you ran a background check on me", "well, that's what journalists do".

Matt was a commentator and executive producer of rugby at Fox Sports Australia before he was lured by the challenge of pioneering a new sports channel in Malaysia.

"I'm not going to be long here, once I'm done, this will be a Malaysian channel, run by Malaysians. My job is to lay down the foundation."

When I was told of Matt's sudden demise by producer Slamet Sazly Yakub as we were recording the fourth and final segment of the latest episode of Kafe Sukan, I was shocked.

My mind harked back to the last time I met him at the Astro raya do on Thursday, when again I could not resist the temptation of teasing him, "Hey Matt, how come I was not invited by Arena for this do, I am a guest of Awani."

An avid golfer, Matt, 45, leaves behind a wife and three kids.

His death, apparently due to a heart attack, has left Arena without the captain of the ship. But I guess others will rise to the occasion and steer the ship to the ultimate destination, which is to encourage a culture for sports in Malaysia through the most influential medium - television.

"Can you spare 2 minutes?" he requested, and we ended up talking for more than half an hour, which is quite long than our regular "Hi & Bye" gestures. He explained about his plans for Arena and his plans for me. Those words still running in my head. And it was fated to be our last conversation last Wednesday." 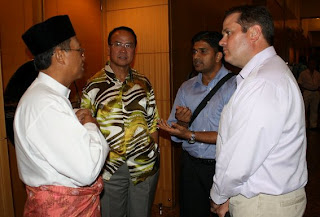 As I drove back home from AstroArena yesterday, it rained heavily, like the day I was introduced to a nice chap and fellow sports fan called Matt McKeown, almost 10 months ago.
Posted by rizal hashim at 10:37 AM

Few days has passed, I still could not comprehend our lives in Astro Arena without him.

Matt was an exceptional person. One of the most inspiring person that I've had the pleasure of knowing in my life.

Couldn't agree more with Khawari,.indeed an exceptional person.
I still remember when I first met him in ABC,..Bukit Jalil on November 2009 as we were introduce by CK Lee,Supersports top man..
My first impression of him, is that he had a vison for Astro Arena, and very vast experience guy from Fox Sports Australia.
As mentioned by Rizal,..he too said to me on our first meeting,.that he was going to be here for a short while to lay the foundations, as this channel will later on run by locals.
Regret couldn't make it for Matt's service,.but it was a great pleasure knowing him.

I would like to exchange links with your site rizalhashim.blogspot.com
Is this possible?

Very very good blog post, it is straightforward and informative. No nonsense blog post. Brilliant, doc - Keep It Up.