A new Arena for sports aficionados 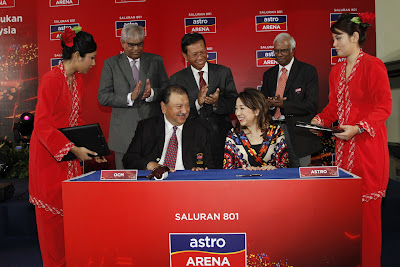 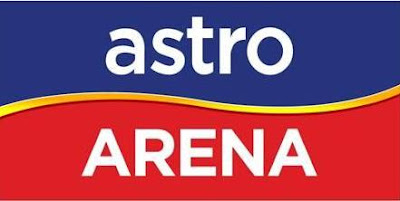 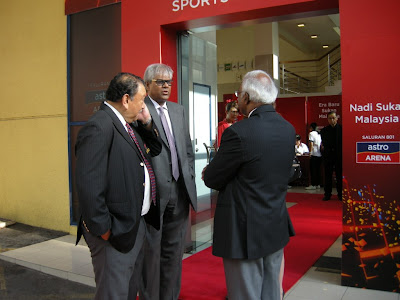 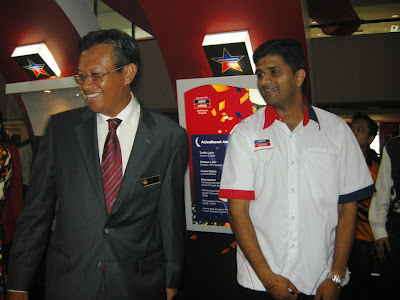 Former cricketer Venu Ramadass (right), a full international at the age of 17, is a key figure in Arena 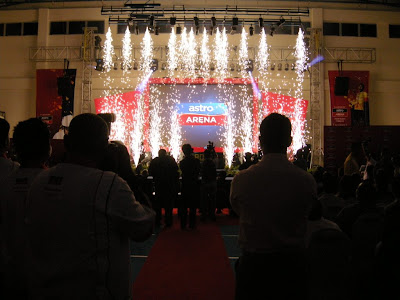 Can we expect fireworks from Arena? 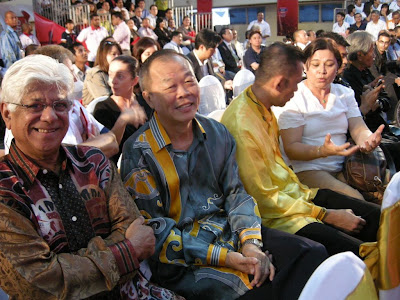 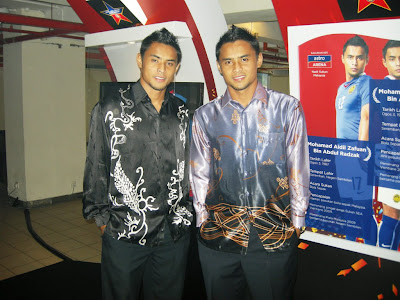 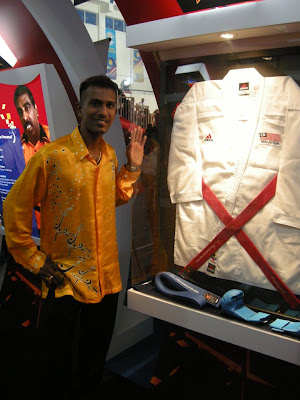 One of the nicest chaps in the fraternity, R. Puvaneswaran of karate... 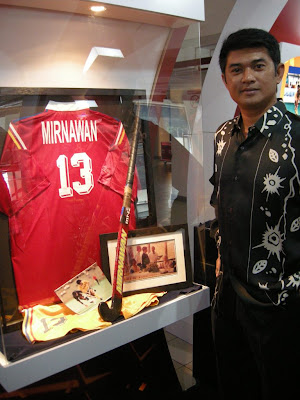 His mazy dribbling skills left many a Johannian frustrated but as Malaysia's foremost attacker of his generation, Mirnawan "Boss" Nawawi was a fearsome player in the world of hockey... 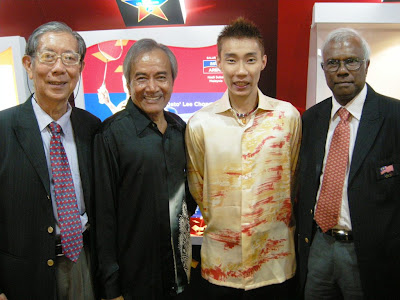 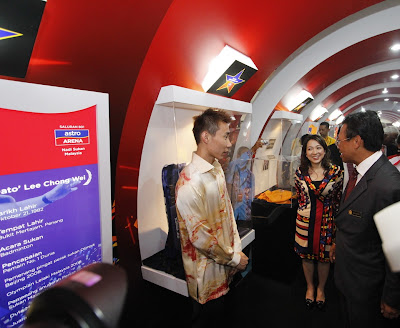 The man of the moment, Datuk Lee Chong Wei, entertains questions from Shabery and Rohana 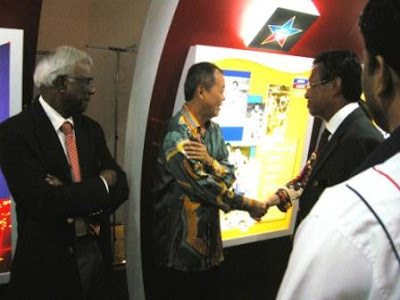 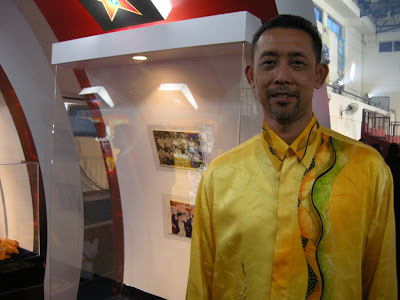 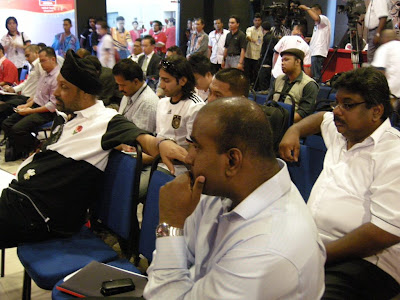 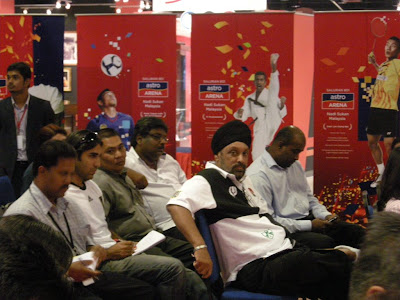 Iconic figures were there. Sports Minister Datuk Ahmad Shabery Cheek was there. Loose cannon's fellow bloggers were there as well. What else do you expect when the first 24-hour Bahasa Malaysia sports channel was launched amidst a stadium-like atmosphere at the Wisma OCM a short while ago?

Astro Arena will start its broadcast on Friday, March 26 over channel 801. It will have four slots for news bulletins and numerous talks shows. With the tagline Nadi Sukan Malaysia, or Malaysia's sporting pulse, Arena is a must-watch for sports enthusiasts and aficionados. Among those in Arena's stable is Sportswriters Association of Malaysia (SAM) president, Ahmad Khawari Isa, who is head of news and third in command, Akhbar Sahari of Scoreboard fame and Zainal Abidin Rawop.

Dato’ Ahmad Shabery Cheek, Minister of Youth and Sports commended Astro Arena for its role in helping to broadcast local sports which supports the government’s aspiration to instill sporting excellence and promote healthy sporting lifestyle amongst Malaysians. He added, “The launch of Astro Arena is timely and in line with the Ministry of Education’s recent announcement in making sports as a school subject, as opposed to a co-curriculum activity. Astro Arena through its content and on-ground events can further help develop a strong local sports identity among local communities and motivate the younger generation to take up sports.”

Dato’ Rohana Rozhan says, “In our continuous efforts to be the No.1 choice for Malaysian households, ASTRO is committed to invest towards expanding and strengthening our products and offering through the introduction of innovative features such as High Definition (HD) services, digital video recording and IPTV connectivity. In our content and customer experience, ASTRO continues to be ahead of the curve by evolving with innovation to deliver a strong sports value proposition of bringing the best of international and local sports to Malaysian sports fans. Astro Arena meets the unfulfilled demand for local sports content via a holistic offering of live coverage of major regional and local sporting events, in-depth and extensive news coverage of matches and development of sports and athletes in Malaysia.”

Malaysians are able to follow the nation’s sporting heroes closely and see how they fare in some of the regional sports events on Astro Arena, especially in the upcoming events this year such as Commonwealth Games in Delhi, Asian Games in Guangzhou and the first Youth Olympics in Singapore.

YAM Tunku Tan Sri Imran Ibni Almarhum Tuanku Jaa’far, President of OCM said, “We are happy to be working together with ASTRO to provide more opportunities for the national sports associations and other local sporting bodies to have their sports news and events viewed by a bigger audience on ASTRO’s platform. We hope Astro Arena will further boost the growth of the local sports industry and talents.”

In making sports more appealing to the younger generation, Astro Arena has appointed Datuk Lee Chong Wei, Esther Cheah, Daniel Bego, Mohd. Hazizul Hasni Awang, R. Puvaneswaran, Mohd Aidil Zafuan, Mohd Zaquan Adha and P.Mariappan as channel ambassadors. These ambassadors will be involved in sports clinics and road shows to bring Astro Arena closer to the community. Alongside the live coverage of sports news and events, the channel will also feature stories of Malaysian sporting heroes to relive the past glories of sports.

Astro Arena completes ASTRO’s Family Package with sports offering alongside entertainment, information and education. With Astro Arena, currently there are 29 ASTRO branded and affiliated channels and 10 sports channels, including 2 channels in High Definition and 1 channel for sports pay-per-view on the ASTRO platform.
Posted by rizal hashim at 6:04 PM

Okay, let's temper our enthusiasm. Will this channel turn out to be a front for rent-seekers and carpetbaggers? That is a Rm1 million question. Will this turn out to be a channel to butter up the establishment? Your guess is as good as mine. I think Rizal has the right answers.

Will all the local sports fraternity reaped it's benefits or just a few that can draw the crowd.

We must and still must remember that Astro is and will be the money making channel.

If those local sports associations can't draw the viewer digits...will they be given any light of day by Astro Arena.

Sdr.Rizal,
Wow! You sure gushing with enthusiasm over the launch of this wonder channel for local sports.
Just wondering.
What is in this launch for the national associations, athletes and offcials, who will be main cast? What is in it for the OCM?
You mean, the people mentioned get nothing and ASTRO gets everything? As has been pointed out, this is a private channel, which you have to pay to watch.

How is it going to serve the interest of Malaysian sport and its development,Seems like a bad start to me- only a fraction of the country gets to watch Rizal Hashim being interviewed as one of the main guests on Arena's talk shows. Example only-lah!

After all what is the point of having friends in high places-ah?

Nice effort...but will it last? Seriosuly?

Can they find enough programs to slot in, instead of repeating stuff countless times over.

I hope they show the cycling World Champsionships over this weekend for a start :)

I am not going to be a wet blanket. But I am going to tell the truth. The truth is, this channel wont last long, for the simple reason it is going to compete against the likes of Astrosports, ESPN. Mind you, these are big guys backed by huge budgets. Not forgetting money spinners like EPL. In short, you are coming up against the heavy artillery of sports. Arena will of course cater to die-hard afficionadoes who are in the minority. Sooner or later, reality will bite. And the moolah will run out. Dont expect the Fabulous Moolah to bail you out. You cant live on mojo alone. In the meantime, enjoy the fun while it lasts.