Farewell The Greatest of All Time

I was dispatched to Singapore by the Malay Mail to meet Pele in December 2001. My biggest regret was that I have misplaced the picture with arguably the Greatest Footballer of All Time. 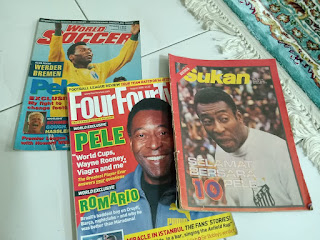 Below is the story ran by the Malay Mail in December 2001.
IN THE PRESENCE OF A LEGEND
SOME sporting events are, well, just events. Meeting a sports figure acclaimed as the No 1 and the most celebrated in his chosen sport is a different story altogether.
It is, naturally, an event by itself. The eagerly awaited Press conference in the hub of Singapore, was scheduled at 2pm yesterday.
Pele, the maestro himself and in the middle of a hectic promotional tour as the Global Spokesperson of Mastercard International, emerged almost 20 minutes later, flanked by Ajay Bhalla, vice-president and Country Manager Singapore for MasterCard International, as well as two bodyguards.
In his second visit to our southern neighbours since 1974, Pele or Edson Arantes do Nascimento (he was named after Thomas Edison) clad in a dark blazer, needed no introduction.
In the ensuing 50 minutes or so, Pele gave a few words, entertained questions from the floor before indulging in the routine autograph and photo opportunities for the media.
Some, perhaps, were awestruck by the presence of an individual whose popularity had astounded Robert Redford who remarked "Wow, man you're popular" after Pele gave dozens of autographs in New York while he was not asked for one.
Questions, obviously, centred on the forthcoming World Cup in Japan- Korea in May 2002, Brazil (of course) to changes in FIFA which he described the world body having become more democratic since Sepp Blatter took over from Joao Havelange.
On Brazil's World Cup chances, Pele quipped: "I've done my job (referring to his three winners medals) ... but later voiced his optimism that his fellow countrymen would enter the last four under the stewardship of Felipe Scolari.
On the first World Cup to be held in Asia, the 61-year old believed it would be an interesting affair not only because of the neutral ground (the Europeans and the Latin Americans share the same number of wins- eight) but also due to the presence of several debutants.
"A lot of teams could surprise. If you noticed, almost 40 per cent of the teams that competed in France'98 will not be in Korea-Japan."
On the best player in the planet, Pele said: "(Zinedine) Zidane has been consistent for the past four or five years."
He also mentioned Spain's Raul, Portugese idol Luis Figo and Argentine Juan Sebastian Veron.
Asked about England's Michael Owen, Pele believed the Liverpool darling could walk into any team in the world.
"I hold him in high regard."
The question and answer session took 40 minutes. Pele was running short of time. The living legend had other commitments or maybe he just needed a rest.
The Press quickly swarmed the former Brazilian Sport Minister.
Interestingly, Pele signed a ball and without prior notice, offered it to whomever who could answer his question correctly.
"How many goals did I score in my career?" Pele posed the question.
It caught many off-guard. But Wilfred Yeo was not one of them.
The veteran journalist and Straits Times sports columnist duly answered "1,283".
Someone shouted "one thousand" without being specific while the rest were reduced to being mere onlookers.
Pele then gave Yeo the ball - with the black and white pentagon design similar to those used in the 1970 and 1974 World Cups, and a warm hug.
Clearly the King never disappoints. One can always rely on his humility, which has always been one of his strong points.
Included in his two-day itinerary are visits to Singapore's National Kidney Foundation and the S-League Party at Planet Hollywood where he is scheduled to give away the awards - Best Cheerleading, Best Half-time performance and the Most Improved Fan Club.
It was a unique occasion, one to frame and hang on the wall, and certainly not only for Yeo.
Farewell King.
The only picture from that trip was this...with a replica of the trophy Pele lifted on three occasions, though his contribution was limited in 1962. 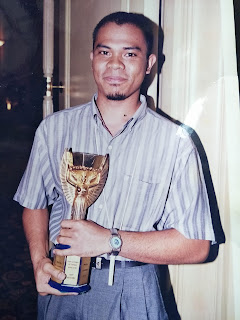