Such was our friendship that Zol Embong came to my wedding in Batu Pahat in 2001, while Dr Ramlan's father was my childhood barber. But for those who know me personally and through my writings, personal connection or friendships do not hold me back from being as objective as possible in my assessment, despite accusations on the contrary. 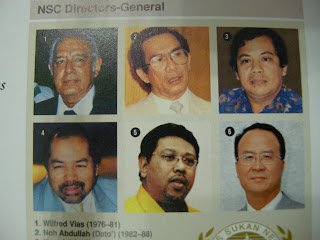 How many of you, including journos, editors and officials, have interviewed or spoken to all six director-generals of the NSC? I have...and since I have covered the NSC and ISN since 1991, allow me the liberty to express my opinion without fear or favour. For sports fans or students of sports management, they need to understand the history behind NSC and its reason for being. Also media bosses need to fathom the politics before listening to one side of the story...and why NSC is as  important as the FA of Malaysia or the BA of Malaysia, if not more...


Episode 1 kicks off with this:

This Open Letter was published by the Malay Mail in 2007.

DEAR Datuk Zolkples Embong and Datuk Dr Ramlan Abdul Aziz, I hope this letter reaches the two of you in great health. First of all, allow me to congratulate you, Datuk Zol, on your appointment as the sixth Director-General of the National Sports Council (NSC).


Also felicitation to Dr Ramlan as the first DG of the National Sports Institute (ISN) although I must say I find it odd that what were formerly a mere division in NSC have been transformed into a separate entity than the NSC DG.


However, I'm sure you, Datuk Zol, would not consider this a setback. Even if a number of analysts consider the splitting of NSC and ISN heralds a new chapter in the governance of Malaysian sports, it is unwarranted, actually.


NSC, established under the NSC Act 1971, is an institution tasked with coordinating, monitoring and protecting Government's interests in elite sports, while ISN was just a division under NSC who is supposed to conduct scientific research and provide support services to its customers, mainly the athletes and other stakeholders.


For you, Datuk Zol, you have finally landed the job which was supposed to be yours anyway. Everybody in the sports fraternity knew you were being groomed by Datuk Wira Mazlan Ahmad for the job but the powers-that-be, perhaps ill-advised or by design, pretended they knew better.


Because of your links with Datuk Wira, who did not share the powers-that-be's reckless extravagance, Dr Ramlan, with his guitar playing skills and medical know-how, was seen as the right man for the job in August 2005.


At that time, however, there was no talk of giving ISN autonomous power. Why now? NSC has evolved since the agency was re-activated in 1982. I'm sure, Datuk Zol, you are aware of this since you have been there since 1984.


By 1998, NSC had grown into a huge and respected entity, particularly when Datuk Wira Mazlan, with the support of his crew and the relevant stakeholders, oversaw a comprehensive plan that enabled Malaysia to pick up 10 gold medals as hosts of the Commonwealth Games.


Under his guidance, NSC was perceived as being authoritarian, prone to making unilateral decisions and too thrifty. Others felt it was necessary to get things done. Some believed the decision-making process was done through a transparent manner, with the advent of joint committee meetings involving both NSC and the National Sports Associations (NSAs).


In that sense, Datuk Wira Mazlan's policy of using an iron hand in a velvet glove, of course with the blessings of Datuk Annuar Musa, Datuk Abdul Ghani Othman, Tan Sri Muhyiddin Yassin and Datuk Hishammuddin Hussein, was suited to the times.


After all, when Datuk Wira Mazlan assumed the hot-seat in 1993, not only NSC was tasked with the responsibility of producing the goods by the former Prime Minister Tun Dr Mahathir Mohamad himself, but he had to grapple with NSC's internal politics. He knew NSC, based at the Stadium Negara then, were split into two camps when he inherited the post from Datuk Kamalul Ariffin Abdul Rahim.


I'm sure you don't need reminding which camp you were aligned with, since you and your former boss at the development division, Zaki Abdul Rahman, were stationed at the Maba House. Datuk Wira Mazlan, with Datuk Ho Koh Chye by his side, used golf as the unifying factor and a reason to get his colleagues together.


It was also an open secret Mazlan had identified the late Rahim Haron, a graduate from Perth who was a workaholic and a very knowledgeable official, as his anointed successor before his sudden demise robbed the country of one of the most competent sports administrators.


The challenge for you, Datuk Zol, is to blend Datuk Wira Mazlan's leadership qualities with the charm of Dr Ramlan, and a huge dose of your own management skills.


At the same time, you have to play ball with certain individuals, which is unavoidable in our political and societal landscape, play hard ball with the NSAs, and be on-theball with the athletes, who basically are your top priority.


In dealing with your fellow mortals, Datuk Zol, a high IQ is nothing without a high EQ. As such, you have to balance feelings with logic, reason and reality and act out of desire, not because of guilt, force or obligation.


You have to be morally autonomous, emotionally resilient, and not motivated by power, wealth, status, fame and approval. You must not carry grudges. Being an avid sportsman, you have to be sporting enough to accept criticism and be open to ideas from your subordinates.


I'm sure for the past two years NSC staff were a little bit demoralised. You, Datuk Zol, have to rectify this and revive the team spirit that enabled NSC to deliver the results. Senior officials like Ahmad Shapawi Ismail, who was in charge of the international division until the powers-that-be established a parallel body under Datuk Seri Dr Ibrahim Saad, must be fully utilised to your own advantage.


As for Dr Ramlan, the challenge for you is to change the perception that you have been found wanting even during your days as the director of ISN. Some claim there was a reason why many good medical officers left ISN under a cloud. ISN, your detractors claim, has not done enough to warrant a split.


The bigger challenge for you is to - start delivering what is expected of ISN - scientific support at every State.


Anyway, thank you, Datuk Zol, for succumbing to my persuasion Malay Mail to register a team from NSC to compete at The Malay Mail Big Walk this Sunday. This is unprecedented in the history of NSC, but the The Malay Mail second time the NSC workforce are involved in our project since The he Malay Mail-Nestle Ladies Walk in January.


To Datuk Zol, I look forward to taking potshots at your favourite English club Manchester United over a plate of nasi ayam kampung beside the Kuala Lumpur Velodrome, while I owe Dr Ramlan a satay feast at Ismail Satay, a stone's throw from his parents' house. See you soon.

I remember getting a text message from Zol Embong saying that he almost cried reading this article...because   not everyone knew of the inner workings of NSC...

rizal, fredy was to the first dg. he was a director, just like marican at kbs. when freddy left, noh came as the first dg. the rest is history.

Fair...but hold the budget which is coming in and let the new people (CEO) manage and we see how.

I was there the day Noh Abdullah was appointed the NSC DG AFTER Freddy Vias. I was at Wisma Keramat.Remember the place?

after 5 years how u describe both of the main actors now.

do u happy to both of them?

anon 9.45pm, I'm just sharing with my readers what I wrote five years ago...I think the things I've written are still quite relevant...because it was an honest open letter reminding them of their responsibilities...

but it is their job to take malaysian sports to greater heights by making decisions purely on merit...

but many think otherwise hahahaha

Vias was also a member of the hockey team for the 1956 Olympics in Melbourne...

I went to his place in PJ a couple of years back, nice and cosy...

one of them was ordered to be somewhere in the ministry of sport doing something else. it means he did not perform what is expected by u in 2007.

Years ago you wrote:

"...NSC, established under the NSC Act 1971, is an institution tasked with coordinating, monitoring and protecting Government's interests in elite sports, while ISN was just a division under NSC who is supposed to conduct scientific research and provide support services to its customers, mainly the athletes and other stakeholders..."

May I suggest that Tuan and take a look at the NSC Act just one more time. It'll be interesting to read your interpretation of NSC's function then.

For convenience, here is the link:

Sdr rizal
i believe the current situation is largely because politicians meaning minister who are just want to take care of themselves and NSC/KBS (government servants) who could care less. People like the current KP is in my opinion WEAK leader more like kaki bodek mentri ...from the days of Azalina to now.....no wonder our sports are going no where. Look a badminton ..the NSC cant even with BAM show where after chong wei.....

the priority one of them is to collect awards datuk and the latest datuk seri.

is that in the national sports council act?

Dear anon 11.41 am. Why you bashing nsc since BAM got millions of ringgit from sponsor and do not have proper planning to produce the next chong wei. Better study the whole structure before you comment.

Ask BAM did they have long and short term plan and changing coaches is not consider plan please.

Ask MOM what happen to their rating system? Why FAM got better rating but their ranking sinking as fast as titanic.

"In a well-coached setting youth sports creates memories for a lifetime and teaching that extend beyond the playing field"
The coach and sports organization that has the patience, persistence and knowledge to teach lessons beyond passing,shooting,catching and strategy will pass these important skills along to youth.
Sports is a terrific setting to teach teamwork,healthy competitiveness,discipline and leadership, but these lesson are lost in the absence of skilled coaches due to weaknesses in our national sports policy and drawing-up of the blueprint without proper understanding of our societies social behaviour.
It is important that sports associations conduct coach education that extends beyond the Xs and Os into how to lay the foundation for character development.