The end of the road

Bye, bye Thomas...among the status updates in the world of facebook.com, clearly referring to the national badminton's team defeat to China in the Thomas Cup semis a short while ago.

What next for Malaysia?

If heads were to roll, can that transform our fortunes?

* The Thomas Cup victory in 1992 was the Thomas-Uber-Olympic (TUO) project launched in 1988 coming to fruition. Remember Fang Kai Xiang's appointment, followed by Chen Changjie, Han Jian and Yang Yang? They masterminded Malaysia's victory over China in the semis and Indonesia in the final, with Tan Sri Elyas Omar, as the BA of Malaysia president, strategising behind the scenes and Punch Gunalan executing the plans, with the players delivering on the courts. Making cameo appearances in the 1988 and 1990 finals were a portent of things to come in 1992, whereas our last appearance in the final prior to this year's edition was 2002.

* Malaysia's over-reliance on Chong Wei and doubles specialists Koo Kien Keat-Tan Boon Heong is dangerous. Neither Chong Wei nor Koo Kien Keat-Tan Boon Heong have ever won a major championship, namely the Olympics and the world championship. Lin Dan and Taufik Hidayat, by contrast, seem to know when and how to win the tournaments that matter! Time to stop glossing over the All England!

* Internal strife that led to secretary P. Ganga Rao's sacking had a slight effect on the team, among them the delay in booking for practice time at the tournament venue.

* Time for Syawal Ismail, Misbun Ramdan Misbun, Zulfadli Zulkifli and Iskandar Zulkarnain Zainuddin to mature and make up for the shortage of singles players in Chong Wei's class.

* BAM is an example of a sports association being helmed by a corporate figure Datuk Nadzmi Salleh but he has admitted that he has had to play ball with the rest of the volunteers and behave like a politician in order to survive...so is it a case of personnel or system? 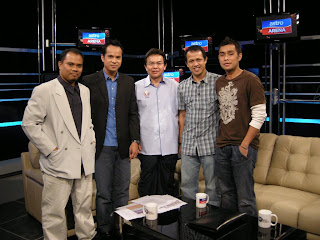 Loose cannon, in John Travolta's 1970s suit, had the pleasure of interacting with Nadzmi, Rexy Mainaky and Fairuzizuan Tazari two weeks ago in Kafe Sukan 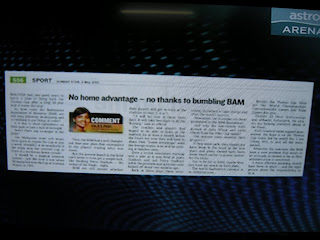 
KUALA LUMPUR (14 MAY 2010) – Three time world champion Lin Dan is not interested in chasing the mantle of being the World No. 1 ranking badminton player.


The Chinese ace bluntly told a press conference that the 'world No. 1 status does not interest him at all' as he has gained everything possible as a badminton player.


“I won everything that the badminton world has to offer. I have the Olympic gold, the world championships and the All England plus numerous other titles. What more do I want to prove my worth?,” said Lin Dan after he outplayed current World No. 1 Lee Chong Wei of Malaysia in the first singles in the Thomas Cup semi-final against China at the Putra Stadium in Bukit Jalil tonight.


The win stretched Lin Dan’s wins over Chong Wei to 14 against six defeats.


Lin Dan, however, praised Chong Wei and said: “Chong Wei is the most difficult opponent to beat. He is one tough player to overcome on court.”


He rates Taufik Hidayat and Chong Wei as the best players with whom he would like to be friends with 'although I do not speak much English.'


“I want to be a better friend with Chong Wei and Taufik,” he quipped with a smile. - www.thomasuberkl2010.com

Lin Dan's statement, if one were to dissect it objectively, is proof enough that BAM ought to revise its incentive scheme which currently rewards players based on the world rankings rather the major titles that matter!

Badminton, nonethless, remains a sport that requires our support. 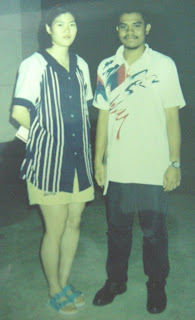 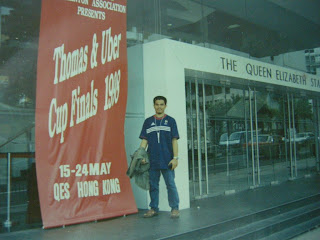 I share Nadzmi's prediction that it is not going to be easy to reach the finals. They were even struggling to reach the semi. But I was extremely surprised that the standard was so far, too far apart. I guess we don't have the width and breadth and also depth. In any situation, when it matters, we must count. When we are arithmetically weak, we will get the sums wrong. Whatever, my love for badminton will not fade.

I dont think we should blame our shuttlers. They tried, they tried, and they tried. Nobody can fault them for their efforts. The point is, China are from another planet. Their depth of strength makes it impossible to even take a point off them. Indonesia will perform slightly better than Malaysia, but they will lose 3-0. Maybe the Indons can take a few games . Maybe. China has turned the Thomas Cup into a farce. And I think the BWf should do something about it. I propose a radical measure to bring more life into the competition. Ban China. Let the Chinese play among themselves for a cup which can be named after Mao Tse Tung. The rest of the world can gleefully compete for the Thomas Cup.

The Korean Uber team has just proved that China is indeed, stoppable. cuma perlu ada mental strength when it matters most.

and bila main di Malaysia, the audience could either be lifting you up or shoot you straight down. more than the players, the audience sometimes could be a bigger shame.